Gov't ready to negotiate with opposition without preconditions: Venezuelan FM 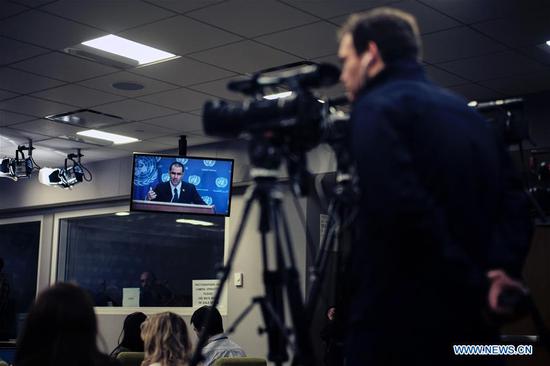 Venezuelan Foreign Minister Jorge Arreaza (on screen) speaks to journalists during a press conference at the UN headquarters in New York, on Feb. 12, 2019. (Xinhua/Li Muzi)

Venezuelan Foreign Minister Jorge Arreaza said on Tuesday that the government led by President Nicolas Maduro is ready to sit down with the opposition without preconditions and seek a solution to the political crisis.

"How can there be preconditions between Venezuelans? The government has been saying: you are Venezuelan, I am Venezuelan. Let's sit down together. We have our Constitution. Let us sit down and engage in dialogue. Let us try to find a solution without any kind of strings attached, or any kind of preconditions," Arreaza told reporters at the UN Headquarters in New York.

"This kind of arrogance (by insisting on preconditions) would just hinder dialogue. That's why we say we are waiting for the opposition to get through its pursuit of independence from the U.S. government ... and then we can sit down with the opposition and agree and negotiate in line with the Constitution, and find a Venezuelan solution."

Venezuela has been in political tension since Jan. 23 when National Assembly President Juan Guaido declared himself interim president and was recognized by the United States and some other countries.