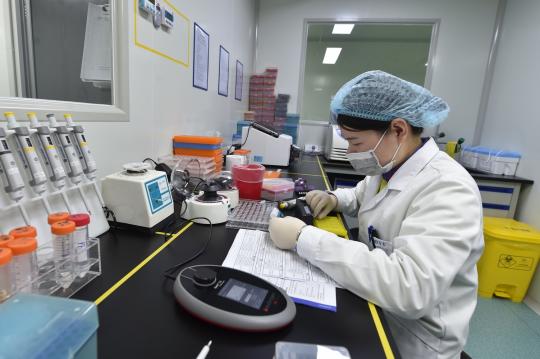 A technician extracts DNA in the lab of a gene testing company in Hangzhou, Zhejiang Province. (HUANG ZONGZHI/XINHUA)

"Know thyself and you will know the universe," said the ancient Greeks. Well, one way to do that nowadays is via DNA analysis.

Just put 2 milliliters of saliva into a container, and send it to a DNA testing company. After 20 days, you will receive an online report detailing your ancestry, physical features, risk of disease, and physical and psychological traits.

While such testing was invented in the West, it is becoming increasingly popular in China.

A recent survey by China Youth Daily showed that the country has more than 230 DNA analysis companies, and 70 percent of them provide such services. Dozens of new companies have sprung up in the multimillion-dollar industry in the past year.

Zhang Qian, 30, said worsening health drove her to undergo analysis. Work pressure had strained the civil servant's health for many years, leading to problems with her blood vessels, thyroid and ovaries. In recent years, reports of young people dying at work had scared her.

Expecting the test to predict and prevent diseases, she paid 699 yuan ($100) for one in March. The results suggested she was likely to develop cardiovascular disease.

Many diseases are caused by genetic mutation, and DNA testing can help identify disease or risk genes so treatment can be sought.

Qin Yu, 25, who works for an information technology company, was worried when a test indicated she was at high risk of developing breast and ovarian cancers.

She remembered the story of Hollywood star Angelina Jolie, who in 2013 underwent a double mastectomy and later had her ovaries removed after learning that she carried a genetic mutation linked to breast and ovarian cancers.

Qin immediately went to a hospital for an examination. The test didn't unearth any serious problems, but she bought health insurance anyway.

In China, DNA testing services cost from hundreds to thousands of yuan, but prices are falling.

The cost of testing was 10,000 times higher in 2001, when the world's first human genome sequence map was completed, said Guo Tingting, founder of GeseDNA Technology, a startup. "It's no longer a luxury, but a service for general consumers," Guo said.

More than 5,000 factors can be detected, including almost 4,000 genetic diseases, more than 100 disease risks, about 100 types of drug sensitivity, and dozens of physical characteristics.

However, most direct-to-consumer testing products provide only limited information about inherited conditions.

Some advertising for DNA tests has been criticized for exaggerated and inaccurate messages about the connection between genetic information and risk of disease. However, most companies stress that their test results should not be used for clinical diagnosis.

Human traits and diseases are the result of a combination of genes and environment, according to Chen Gang, founder of gene testing company WeGene.

"Even gene expression is affected by the environment," said Chen, adding that genes are not the only factor and some of the criticisms were unfair.

Guo agreed: "Genetic information is like your background color, together with your experience in life and your surroundings growing up - the factors that jointly decide who you are."

His company focuses on behavioral genetics. Most of its employees, including Guo, have studied neuroscience and psychology.

The company provides information about people's emotions and behaviors, such as whether they are a party animal, a late sleeper or a loner.

Some people compare such tests to horoscopes, but Guo said the test results are based on real research published in international journals.

For example, "the ratio of being single" was based on a study conducted by researchers at Peking University in Beijing. They found that people with a variant of the HTR1A gene are poor at expressing their emotions, which could lead to misunderstandings in relationships.