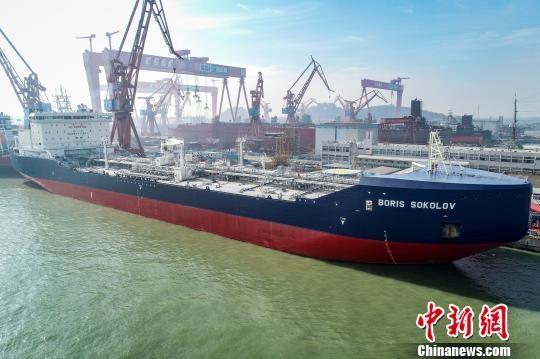 The construction of the first Arctic condensate tanker has come to an end at a shipyard in South China's Guangdong Province, and the tanker will soon be handed over to its Greek owner.

Guangzhou Shipyard International Co Ltd held a naming ceremony for the icebreaking Arc7 ice class vessel with a payload of 44,500 tons on Tuesday, and the tanker was named BORIS SOKOLOV.

Zhou Xuhui, deputy general manager of the shipyard, said the vessel is propelled by pod propulsion system, double acting and can work under the circumstances of 50 C, which makes it unique in the worldwide.

In the past, vessels would work in summer to transport the condensate oil in Arctic area, while the new vessel will continue the transportation in winter, Zhou said.

At both ends of the vessel, there are icebreaking tools that can break the 1.8-meter thick ice layer, and even the ice ridge less than 15 meters, allowing the vessel to move at two knots.

The tanker has no rudder but at the stern, there are two pod propellers that can revolve 360 degrees to control it to move forward or backward.