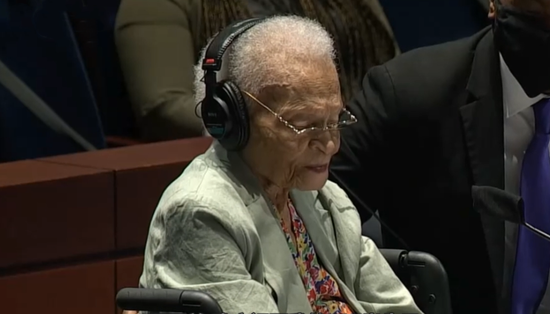 Viola Ford Fletcher, the oldest survivor of the 1921 Tulsa Race Massacre, testifies at the hearing on May 19, 2021. (Photo/Screenshot of CNSTV)

(ECNS) -- Three centenarian survivors of the 1921 Tulsa Race Massacre testified in court during a U.S. congressional hearing on Wednesday, suing the city of Tulsa. It has been a hundred years since a violent white mob swept the city’s "Black Wall Street," "killing hundreds of African Americans," according to The Guardian.

Racism is a major and long-lasting feature of the United States, with deeply-rooted structural racism accelerating the division of American society. Viola Ford Fletcher, the eldest survivor at the hearing, said "I am 107 years old and have never seen justice." "Black Tulsa is still messed up today. They didn't rebuild it. It's empty, it's a ghetto," said Lessie Benningfield Randall, who is now 106.

The U.S. government's handling of "one of the worst episodes of racial violence in American history" does not soothe the pain and sorrow of African Americans. As this part of history is fading in the country, only a handful of those who witnessed and tasted its bitterness are looking forward to justice.

One hundred years have passed by and the witnesses grown old. How long can they still wait for a day of fairness?