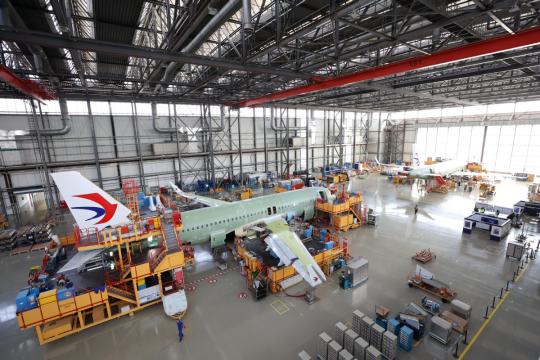 The assembly line of the Airbus A320 family of aircraft in Tianjin. (Photo/Xinhua)

China's large-scale production of aviation fuel derived from used cooking oil will be utilized in flights soon, with the first batch of it produced by China Petrochemical Corp to be supplied to Airbus' Tianjin plant this month.

The aviation fuel is produced by Zhejiang-based Sinopec Zhenhai Refining &Chemical Co, a subsidiary of Sinopec, which has the capacity to produce 100,000 metric tons of aviation biofuel from secondhand cooking oil each year, it said.

To get an airworthiness certificate means the sustainable aviation fuel that Zhenhai Refining produced from used cooking oil can be sold to the entire civil aviation market nationwide, said Mo Dingge, CEO of Zhenhai Refining.

The company vows to further expand the market and supply chains to pave the way for accessing international markets in the future.

Biojet fuel, which cuts emissions of carbon dioxide by more than half over the whole life cycle, has gained momentum against the backdrop of carbon peak and carbon neutrality goals in the country in recent years.

Ever since 2011, Sinopec－together with China National Petroleum Corp－has finished four flight test trials using biojet fuel, including the nation's first cross-oceanic flight powered by green aviation fuel in 2017 when a Hainan Airlines flight from Beijing to Chicago carried 186 passengers and 15 crew members over a distance of 11,297 kilometers.

The Boeing 787 aircraft flew with biofuel produced from used cooking oil by Sinopec. The biofuel is a mix of 15 percent cooking oil and 85 percent conventional aviation fuel.

Analysts said airlines, airports and governments are all taking action to boost adoption of sustainable aviation fuel, one of a few available technologies capable of cutting emissions from the aviation sector.

North America and Europe are currently leading the charge, due to airlines' efforts and supportive policies, including a sustainable aviation fuel tax credit in the newly passed US Inflation Reduction Act, it said.

According to BloombergNEF analyst Jade Patterson, despite growing interest and targets from the aviation industry, sustainable aviation fuel supply remains scarce and highly concentrated among a few producers. A multitude of projects to bring new capacity online are planned over the next five years.

Private companies are also laying out plans for the development of biojet fuel. Zhejiang Jiaao Enprotech Stock Co Ltd said in a release that the company plans to invest 4 billion yuan in a biofuel project in Lianyungang, East China's Jiangsu province, with an annual output capacity of 500,000 tons.