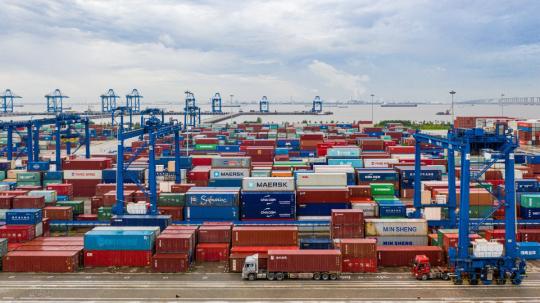 An aerial view of a port in Nantong, Jiangsu province, on July 8, 2021. [Photo by Zhai Huiyong/for China Daily]

China aims to sign more free trade agreements while upgrading existing FTAs to further its opening-up, according to a top commerce official.

Wang Shouwen, vice-minister of commerce, told a media conference in Beijing on Monday that China will step up efforts to form a high-standard FTA network that starts from neighboring economies, covers the Belt and Road Initiative-related economies, and has a global reach.

For next steps, China will further upgrade existing FTAs, including the FTAs with Singapore and South Korea, while accelerating negotiations for new FTAs, such as China-Japan-Republic of Korea, China-Gulf Cooperation Council, China-Norway and China-Israel FTAs, according to him.

The country is also actively considering joining the Comprehensive and Progressive Agreement for Trans-Pacific Partnership, he said.