Yungang Grottoes opens No. 19 cave with statues of Buddha, son 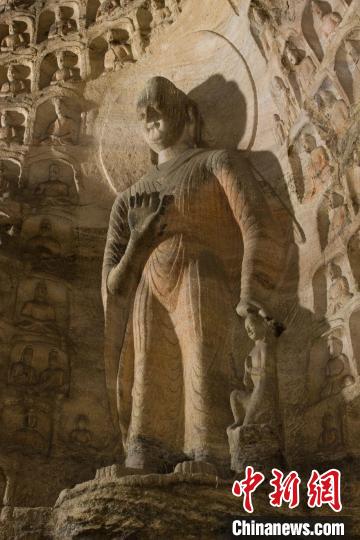 The statues of Sakyamuni and his son Rahula. (Photo provided to China News Service by the Yungang Grottoes Research Academy)

(ECNS) -- No. 19 cave, one of the oldest of Yungang Grottoes, opened to the public Saturday after 40 days of digital information collection.

The statues of Sakyamuni and his son have attracted many visitors.

The father-and-son statues on the west wall of the cave depict the moment Sakyamuni meets his son Rahula. Sakyamuni, with his head bent slightly, strokes Rahula's head affectionately with his left hand.

No. 19 cave is the largest and most unique of Tanyao Five Caves, named after a famous monk who directed the dig of these earliest chambers.

In addition to the main sitting-Buddha statue, more than 4,000 smaller-sized Buddha sculptures, or "thousand-Buddha" statues, have been carved in this cave.

Digital information collection adopts 3D scanning and other technologies to collect information about the grottoes and build a digital file for further protection, studies and cultural industry development. The collection is expected to finish by 2025.

Dating back 1,500 years, the Yungang Grottoes is a relic of the Northern Wei Dynasty (386-534) and one of the largest grottoes in China. The site has 45 major caves and more than 1,100 small niches with over 59,000 statues of varying sizes. The Yungang Grottoes were enrolled as a World Heritage by United Nations Educational, Scientific and Cultural Organization (UNESCO) in 2011.