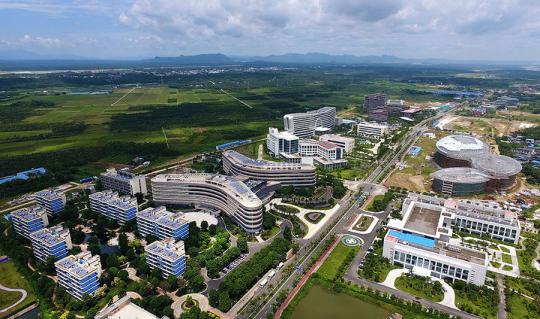 Boao, a town in South China's Hainan province that's well known among global business leaders as the site of the Boao Forum for Asia since its launch in 2001, is becoming a destination of great expectations for medical tourists and leading global pharmaceutical groups.

Special national policies are being implemented at an accelerated speed in the island province.

Gu Gang, director of the Boao Lecheng International Medical Tourism Pilot Zone Administration, which is on eastern Hainan Island, said the zone's licensing policies and innovative service models are attracting much-needed, cutting-edge technology, equipment and medicine, as well as top doctors from China and abroad. This is good news for many Chinese suffering from serious illnesses who are eagerly hoping for the latest drugs or medical devices.

Congcong, a 15-month-old girl, was fortunate to become the first person on the Chinese mainland to receive an upgraded N7 cochlear implant in Boao recently. The new device, with the support of a smartphone app, made it possible for the first time in her life for the girl to hear her mother's sweet songs and stories.

Wang Gang, who is from from Henan province and has stage 3 lung cancer, recently completed the first domestic injection of durvalumab at Boao Evergrande International Hospital in the pilot zone. Durvalumab, produced by UK-based AstraZeneca under the trade name Imfinzi, is expected to extend Wang's chances of surviving three or more years to 50 percent.

Doctors in the zone also said tildrakizumab, the latest psoriasis drug, which debuted last year in the United States, is now available at a reasonable price in Boao. Just four injections a year of the new drug are expected to greatly improve the quality of life for people with severe psoriasis.

In addition, the Ophthalmologic Center at Boao Super Hospital, an innovative medical service platform that hosts more than a dozen clinical centers, "has conducted 60 complicated surgeries in less than one year, all of them the first of their kind on the Chinese mainland", said Chen Wei, the doctor and professor who led the surgeries.

By way of illustrating the cost savings this allowed, he said, for example, that a Boston keratoprosthesis surgery — a procedure to provide an artificial cornea — costs the equivalent of at least 700,000 yuan (about $100,000) overseas. But in the Boao Lecheng pilot zone, the cost is less than 100,000 yuan.

"The progress means that many local people with serious illnesses no longer have to travel elsewhere for advanced treatment," said Gu, the director of the pilot zone's administration.

Dying to Survive, a Chinese movie based on the true story of a small drug store dealers who made money yet saved the life of a larger number of cancer victims by selling generic anti-cancer medicines from India, garnered massive public attention, grossed more than 3.1 billion yuan in box office and led top government administrations to work out better guarantee of anti-cancer medicine supply and price control, according to media reports.

According to the current national regulations, it takes at least three to five years for foreign advanced innovative drugs and medical devices to enter the domestic market.

The Hainan Boao Lecheng International Medical Tourism Pilot Zone was the first of its kind approved by the State Council, China's Cabinet, in 2013, with the aim of focusing on international medical and tourism services, low-carbon communities, and clusters of international organizations to explore a new growth model for China's healthcare sector.

It enjoys nine preferential policies, including special permission for medical talent, technology, devices and drugs; an allowance for entrance of foreign capital and international communications; and permission to carry out cutting-edge medical technology research, such as stem cell clinical research.

Based on the 2013 measures, China unveiled a new package of favorable innovative policies for the pilot zone in September this year, in a bid to make the zone a world-class healthcare destination and an innovation platform for medical science and technology, according to the plan.

In a major breakthrough, the new policies will allow the pilot zone to gather real-world clinical observation data, which means clinical data for some drugs urgently needed in the pilot area, but which are not registered in China, can be converted into observation evidence when filing applications for new drugs and equipment from abroad, according to Luo Wen, vice-chairman of the National Development and Reform Commission. The commission jointly issued the new policies with other three national departments in mid-September.

"This will shorten the time and reduce the cost for new foreign innovative medicine and equipment to enter the Chinese market, and thus generate greater enthusiasm among international pharmaceutical companies to bring the world's most advanced and best drugs to the Chinese market," said Gu.

"The Boao Lecheng pilot zone, covering 20 square kilometers and situated at the mouth of the beautiful Wanquan River, is becoming a bridgehead for international pharmaceutical manufacturers to enter the Chinese market with precision medicines for patients with difficult and severe conditions," Gu added.

He said that at the second China International Import Expo, held in early November in Shanghai, demonstrations of the pilot zone attracted the attention of many big-name companies. The pilot zone signed collaboration agreements with 10 of them, including Johnson & Johnson, Pfizer and Roche, to help introduce innovative drugs to the pilot zone at a faster speed yet lower cost, Gu said.

"We welcome global pharmaceutical giants to showcase their first-class drugs and vaccine products in our pilot zone. Such collaboration benefits the high-quality and high-standard development of international medical tourism and high-end medical service within the zone," he added.

On Dec 7, the pilot zone and Johnson & Johnson jointly launched an innovation chain. "With the innovation chain, we will build a comprehensive and innovative platform that integrates display of our latest R&D achievements, promotion of new technology and products in urgent clinical need, academic exchanges as well as high-end talent training," said Will Song, chairman of Johnson & Johnson China.

Wu Kun, Pfizer China Biopharma's country lead, said: "Reaching collaboration with the Boao Lecheng pilot zone provides us with the opportunity to introduce our latest innovative therapies to the China market within the shortest time. Such practice will enable us to obtain direct clinical responses, which will benefit our better understanding of the detailed needs of Chinese patients."

Gu said, "We will build a number of distinctive medical service centers, including orthopedics, cardiovascular medicine, ophthalmology and otology departments, for instance, and introduce new measures to allow leading public hospitals in cities like Beijing and Shanghai to open franchised medical services in Boao."

The pilot zone has so far accepted 81 investment projects, with 38 having passed medical technology assessments, 16 under construction and nine in operation. In the first nine months of 2019, the number of visits reached about 42,000, a year-on-year increase of 48.3 percent, with total income of 440 million yuan, according to data from the pilot zone's administration.

The zone has signed cooperation agreements with more the 50 academics and teams of experts. In more than half a year, the zone has achieved a number of firsts for China, with accelerated introduction of advanced medical technology, equipment and drugs from around the world.

The medical school of the University of Edinburgh in the United Kingdom, for example, has established an international center for diabetes care in the zone and opened a training center for medical workers, while Seoul-based JK Plastic Surgery Center has also set up in the pilot zone.

More than 100 pioneering projects are expected to be underway in the zone by 2030, creating 41,000 jobs and contributing between 33 billion and 50 billion yuan annually to the local GDP, according to the pilot zone's development plan.

To promote the zone's development, Hainan is working on a plan for real-world clinical data application and research, to introduce necessary standards, and to establish the required legal and regulatory framework, said Shen Xiaoming, governor of the island province. He said a Boao research hospital is under preparation and can serve as a main platform for real-world clinical data application.

Xie Xiangxiang, assistant professor of tourism at Hainan University, said: "The medical tourism industry has become one of the fastest-growing emerging industries in the world. Full implementation of the new special policies will create a more open business environment that will turn the pilot zone into a promising window for medical tourism development in China."