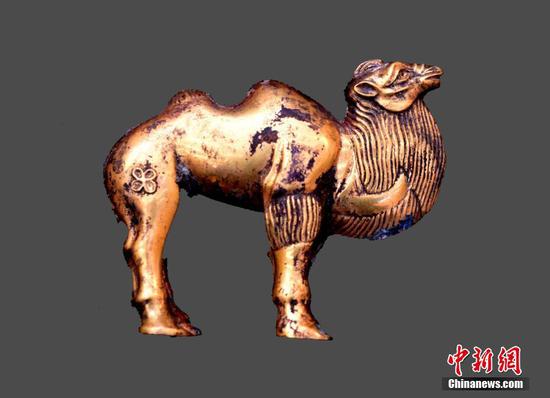 Pictured is a golden camel found during the latest round of excavation in the Mausoleum of the Emperor Qinshihuang, media reported on Monday. It is believed to be the most ancient single body golden camel that has ever been seen in the country, which indicates early exchange between China and the West. (Photo provided to China News Service)

More than 220 new terracotta warriors with five different official titles, including senior military ranks, have been unearthed during the third excavation at the Mausoleum of the Emperor Qinshihuang.

A new military rank, dubbed "lower than the lowest," was found by archeologists at the site, according to a Monday report of Shaanxi TV station based in Xi'an, capital of Northwest China's Shaanxi Province.

"The terracotta warriors in the mausoleum are lined up the same way as real soldiers thousands of years ago in the Qin Dynasty (221BC-206BC) and so that archeologists can research real military systems of the dynasty with these excavated warriors," Liu Zheng, a member of the China Cultural Relics Academy, told the Global Times on Monday.

The third excavation for the Pitch One of the mausoleum has been underway for 10 years, according to Liu.

This round of excavation covered some 400 square meters, the Beijing Youth reported, citing sources with the mausoleum.

Senior military officers in the Qin Dynasty stood at the front with swords in their hands, Liu explained.

Their hair accessories are different from subordinates, he said.

Twelve horses and weapons were also found during this round of excavation, the report said on Monday.

"When these pottery figurines were first excavated, they were mostly colored, with red belts and dark armor, but we lacked preservation skills and the colors faded," he said.

"But this time improved technologies are enabling the newly found figurines to retain their vivid colors."

"Exhibition, excavation and conservation of the mausoleum are proceeding at the same time," Liu said.

New discoveries of suspected accompanying tombs have been made outside the mausoleum.

Among the relics unearthed on Monday, a golden camel found in one of the tombs was believed to be the oldest in China, Shaanxi.