TCM industrial park establishes itself as model of cooperation 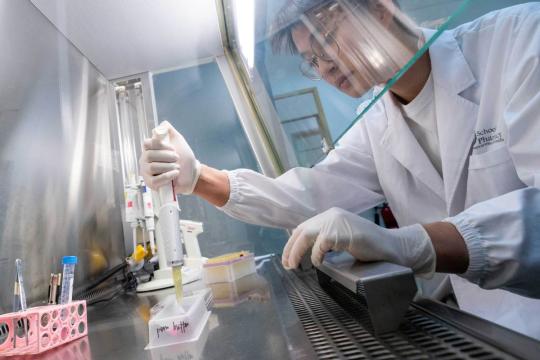 A student conducts a test in the State Key Laboratory of Quality Research in Chinese Medicine at Macau University of Science and Technology in Macao on Oct 30. (LIU JINHAI/XINHUA)

The Guangdong-Macao Traditional Chinese Medicine Science and Technology Industrial Park was established by the Macao Special Administrative Region government and the Guangdong provincial government on Hengqin Island in 2011.

Feng Huai, deputy CEO of the company that manages the 50 hectare park, said 162 TCM companies are registered there, with 40 of them from Macao.

The park has always striven to expand TCM cooperation with Portuguese-speaking countries and international organizations and institutions, including the registration, trade, training and research of TCM products, he said.

It sees Portuguese-speaking countries as an entry point to establish cooperation with countries in Europe and Africa to help TCM enterprises from Macao and the mainland tap into the international market, Feng said.

The industrial park has helped companies bring their TCM products to market, with some having been registered in Mozambique and two already on sale there, he said.

It has also conducted a TCM training program with Mozambique's health authorities that arranges for TCM doctors from the Chinese mainland and Macao to go to Mozambique every year to exchange TCM experiences and train local doctors, physiotherapists and pharmacists, he added.

During a visit to the park in October last year while on an inspection tour of Guangdong, President Xi Jinping urged greater efforts to explore the essence of TCM and better collaboration between enterprises, universities and research institutes to advance its industrialization, modernization and globalization.

He also called for stronger policy support for deepening and expanding cooperation between Hengqin and Macao in developing emerging industries to inject more vitality into Macao's economy.

Lao Taihang, technical director of Macao-Union Pharmaceutical, said the company established a subsidiary at the park in 2017.

Two of its TCM products were registered in Mozambique last year, Lao said, with the park helping it prepare registration documents.

Macao-Union Pharmaceutical wants to use Mozambique as a launchpad to enter the markets of other Portuguese-speaking countries, he said.

"We are negotiating with local agents and we hope that the products enter local markets next year," Lao said.