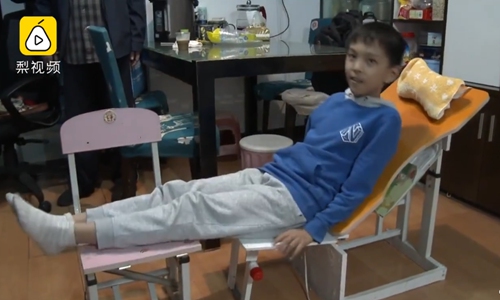 Driven by the desire for more comfortable noontime snoozes in their classroom, two primary school students from South China have invented a desk that can easily transform into a deck chair recliner.

During class the transforming desk looks like a normal school desk, but at lunch hour the left side of the desk is pulled up and out to become the reclining section for the student's legs. The surface of the desk lifts on an incline and a small pillow is flipped over the high end. The student's chair is used as the foot rest, according to a video reported by Pear Video on Tuesday.

"Many students need to take naps at noontime, but our school doesn't have a place for them to sleep," said Chen Zimo, one of the inventors, noting that some students nap while sitting on their chair with their heads on the desk, leading to stiff neck and curved spine. Some students even lie on the floor for their nap.

With the help of their grandfather, Chen and his cousin Liao Yunhan made a workable prototype.

"It feels really comfortable and it's easy to operate," said Liao.