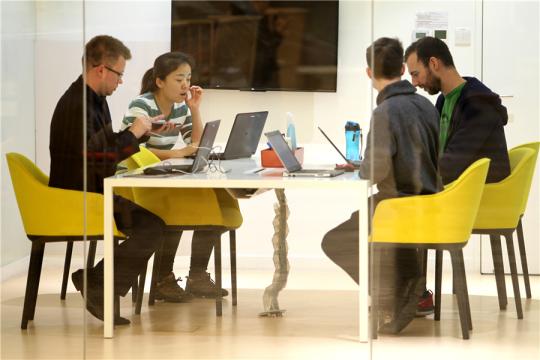 The number of Chinese State-owned and private enterprises investing in improving employees' English proficiency has been rising sharply over the past five to 10 years as more local companies tap into the global market, according to an international company specializing in language training.

Today, employees from State-owned, private and multinational enterprises each account for a third of its clients, while they were dominantly multinationals when Sweden-based EF Education First started offering corporate solutions in China in 2004, said Jesper Knutell, executive vice-president and general manager of corporate solutions at EF China.

"Fifteen years ago, our clients were multinational companies who required their local employees to improve their English proficiency. But the rise of the other two types of enterprises is obvious as they are going or want to go global with China's increasing presence on the international stage," Knutell said during an interview with China Daily on Friday.

"Many big local companies support the Belt and Road Initiative put forward in 2013, and they have opportunities for development in the countries and regions involved in the initiative. That created a strong need for them to upscale employees' language skills in the past few years," he said.

Knutell said the company cannot provide figures for the speed of growth of corporate solutions due to company policy but it keeps investing in this area, which continues to grow in various industries, including technology and pharmaceuticals.

EF's annual English Proficiency Index report this year showed that China rose seven places to 40th in the rankings among 100 countries and regions and went from a low proficiency to a moderate level for the first time.

Major driving factors came from coastal areas and provinces, which have a relatively larger number of companies that are supporting economic incentives like the country's further opening-up and the BRI, and aiming for international growth, the company explained.

Another reason for the growing demand from local enterprises is that they are beginning to lead in various industries, meaning they have competitors globally and they need to fight for the best talent with strong industry and language skills, and international work experience.

"Also, in order to lead in innovation, companies need to access the latest global resources, and the world's leading scientific journals are mainly in English," said Knutell.

For the first time, the number of Chinese companies－129 on this year's Fortune Global 500 list of top companies－surpassed those of the United States on the list.

Knutell mentioned two clients－BOE, a Beijing-based technology company specializing in screen manufacturing, and Hengtong Group based in Suzhou, Jiangsu province, which produces fiber optic and electric power networks. Both enterprises have performed well at home and abroad in recent years and have continued to increase investment in improving English proficiency of employees.

He said that clients have common needs such as practical use of English in meetings and social setting as well as knowledge of industry-specific language in both online and offline solutions.

He said many companies tend to invest in young, employees, but he suggested they should also invest in those holding senior managerial roles as they often need to do presentations in English and speak at international business meetings.