'When the motherland is good, Macao will become better': Vice Chairman of National Committee of CPPCC Ho Hau Wah 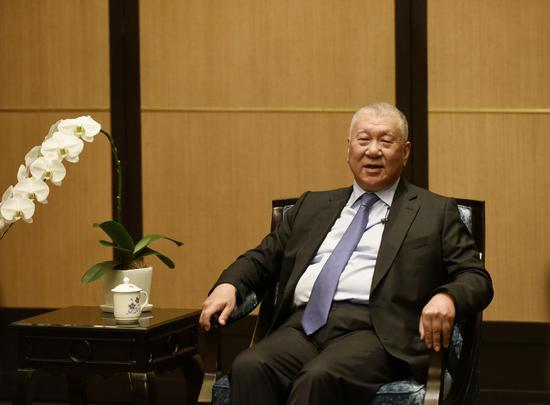 Macao's great development and changes over the past 20 years has demonstrated the vitality of the "one country, two systems" principle. Macao has made these achievements only because it has integrated its own development with that of the motherland, said Ho Hau Wah, vice chairman of the National Committee of the Chinese People's Political Consultative Conference (CPPCC).

ENJOYING ECONOMIC BOOM TOGETHER WITH MOTHERLAND

On Dec. 20, 1999, Ho, standing under the regional and national flags, was sworn in as the first chief executive of the Macao Special Administrative Region (SAR). Macao returned to the embrace of the motherland, opening its new era of "one country, two systems" and "Macao people administering Macao" with a high degree of autonomy.

"Macao's economy was not good at that time. Before the return the financial crisis hit Asia. The unemployment rate was high in Macao and public security was also poor," Ho told Xinhua ahead of the 20th anniversary of Macao's return to the motherland on Dec. 20.

"I made two promises: one is to implement the Basic Law without any compromise to make 'one country, two systems' a success in Macao; the other is I will try my best to deliver a Macao where people can live and work in peace and contentment," he said.

Employment now is full and the government has done its utmost to promote a strong social welfare system including public security, housing, education, medical care, talent training, disaster prevention and mitigation. Macao residents are enjoying a strong sense of happiness and gain.

"Macao wouldn't have made these achievements without the strong support of the central government, its policies as well as the efforts of Macao residents," Ho said. "In my opinion, one important thing is that during the past 20 years, Macao has organically combined its own fate and development with those of the motherland, which not only helped Macao achieve the breakthrough in development but also laid a solid foundation for it to play an important role in the national development."

In the past 20 years, the SAR government has united all walks of the society to comprehensively and accurately understand and implement the "one country, two systems," firmly uphold the authority of the Constitution and Basic Law, pass the torch of loving the motherland and Macao, thus achieving rapid economic development, continuous improvement of people's livelihood and social stability and harmony, demonstrating to the world a successful practice of "one country, two systems" with Macao characteristics.

"After experiencing long time of ups and downs, Macao made today's achievements. All Macao residents know clearly that Macao is backed by a strong motherland and the support of more than 1 billion compatriots in the mainland. Everybody embraces gratitude for the motherland, which has helped continuously strengthen the patriotism spirit of the whole Macao society," Ho said.

For "one country, two systems" to go far and steady in Macao, some good experiences need to be kept. The first is to maintain the core value of loving the motherland and Macao. "Macao residents of all ages have full, accurate understanding of the Basic Law and the national Constitution. This has led to the smooth implementation of the 'one country, two systems' with Macao characteristics," Ho said.

The second is that patriotic spirit education is deep-rooted in schools, youth societies and government agencies, which has helped passing the torch of patriotism tradition from one generation to the next.

The third is Macao residents automatically align their own fate with that of the motherland so that they can actively participate in the Belt and Road Initiative and the construction of the Guangdong-Hong Kong-Macao Greater Bay Area (GBA), seeking their own development opportunities within the overall development plan of the country.

He acknowledged that there are always times when people differ with the government. "But Macao residents have never wavered in their confidence in the 'one country, two systems,' and their feelings for the motherland have never weakened a bit. This is amazing!" Ho said.