Hainan a haven for hardy runners 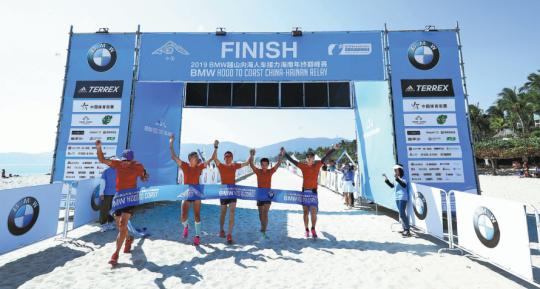 A team of runners cross the finish line at the 150.9-km BMW Hood to Coast China-Hainan Relay on Saturday. (PHOTO PROVIDED TO CHINA DAILY)

During the winter months, motivation levels can often plummet for China's running enthusiasts as the temptation to stay indoors trumps chilly training sessions.

The new BMW Hood to Coast China-Hainan Relay, however, offers those determined to get their outdoor endurance fix a warm and scenic option to beat the winter blues.

The 150.9-kilometer, 24-hour race staged its inaugural edition on the southern island last weekend, with a total of 400 teams comprised of 2,000 runners－including a sizable foreign contingent hailing from 32 different cities－taking on the grueling challenge.

Beginning on Saturday midnight at the picturesque Yanoda Rainforest Cultural Tourism Zone, race rules required each of the course's 15 sections to be completed by one team member while the other four traveled by car and alternated running duties. A grand party awaited finishers at Hainan's Yalong Bay Central Square Beach, where Team Yijiajun was crowned the champion with a time of 8 hours, 21 minutes and 19 seconds.

"Our team's success is the result of a cohesive effort from everyone," said Yijiajun's Zhao Hao. "It's the spirit of the team work that empowered us to run till the last second and win the championship.

"We've been through the 150-kilometer challenge, and the last one kilometer was especially challenging. With the sea breeze, I could hear the sound of my teammates cheering. So I ran as fast as I could to reach the finish line to cheer with them.

"We were just so united throughout the whole challenge, and that's the key of how we achieved our ultimate goal. I believe this experience will be very meaningful and helpful to our running careers."

The original Hood to Coast Relay, founded in 1982, takes place in the US state of Oregon every August. The series debuted in China at 2022 Winter Olympics co-host city Zhangjiakou, Hebei province, in 2017 when 805 runners participated; a year later the field had grown to 1,280. In July, 1,800 runners traversed Hebei's tough mountain terrain and bucolic grasslands－a very different racing environment to the Hainan edition.

Some runners couldn't resist the temptation to try both.

"Our team has completed three Hood to Coast China relays, in Zhangjiakou and in Hainan," said Dong Baoqing of Auto-men Running Team.

"Each time, it has been a very meaningful experience for us, and we had a great performance here in Hainan. All this became possible due to our team effort and the spirit of never giving up.

"The scenic views along the track and enthusiasm of local people were also very impressive. With stars lighting up the night sky at the start and the picturesque scenery along the route, the whole experience was so warm. That's exactly the charm of the Hood to Coast. So I'm sure we will keep participating in this event. Just like our slogan: Never back down and just keep running."

Ensuring the event's success involved a major logistical effort between organizers and local government. Local police and volunteers were even stationed along the track at night to assist runners.

A total of 16 ambulances, 22 defibrillators and 80 doctors were at the ready in case of any medical emergencies, while 70 experienced first responders were also on hand along the course.

Sixteen volunteers and runners from the Zhangjiakou relay led efforts to organize and guide the 300 local volunteers in Hainan.

"It's the first time that the Hood to Coast relay was held in Hainan and we received great help from Hainan's local government," said Li Lu, the general manager of event organizer Starz Sports Running Culture.

"The Hood to Coast finally let the runners reach the coastline of China. In future, we will have the China relay in the mountains in the first half of the year and on the coast in the second half of the year, annually. Also, we want to build the Hainan relay into a year-ending carnival. We hope more people can join in this grand party."

Li believes the benefits for the island's economy are manifold.

"With the relay's steady development and growth in China, we believe the race in Hainan will be attractive to runners from all over the world. It will not only help to build a new sports brand in Hainan, but will also benefit the local economy."