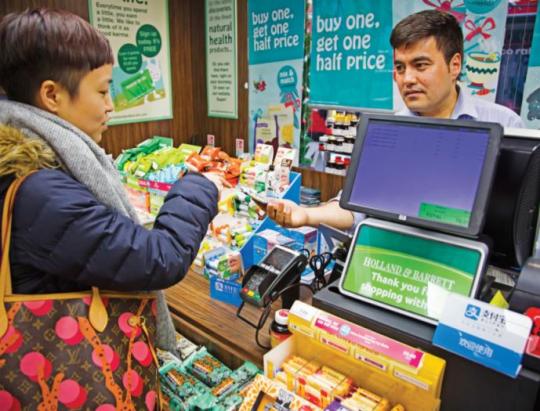 British re tailers got a boost during China's Golden Week holiday at the start of October from free-spending Chinese tourists.

Alipay, China's leading mobile payment platform, says in a new report that Chinese shoppers used Alipay to spend an average of 485 pounds ($590) each while in the United Kingdom during the holiday, which was more than twice what they spent during the same seven-day period last year.

The UK was also the most popular shopping destination in Europe among Chinese tourists during Golden Week. And data also revealed Alipay transactions in the UK during the period increased by 70 percent year-on-year.

Roland Palmer, head of Alipay in the UK, France, the Netherlands, and the Nordic nations, said: "Conditions have never been tougher for retailers, with many big household names struggling to stay afloat or shutting up shop altogether. However, outbound Chinese tourists present a significant opportunity for UK retailers and it is encouraging to see that European destinations and products are still hugely popular with Chinese visitors."

Golden Week is a Chinese national holiday during which many people have time off between Oct 1 and Oct 7 and is a time when millions of Chinese tourists travel and shop abroad, providing retailers with a prime opportunity to increase sales.

Data from Fliggy, Alibaba's travel service platform, also revealed that the number of visitors from China booking trips to Britain for Golden Week this year increased by 40 percent compared with the same period last year.

Popular shopping destinations include outlet centers such as Bicester Village and department stores including Harrods, Selfridges, and Harvey Nichols.

"Mobile payments are the most popular method of payment for Chinese nationals, so it's exciting that Alipay is now so firmly established in the UK, providing Chinese travelers with a seamless shopping experience abroad," Palmer added. "The number of Alipay users in 2019 is more than double what it was last year, while the number of UK merchants offering Alipay has more than tripled in the past year."