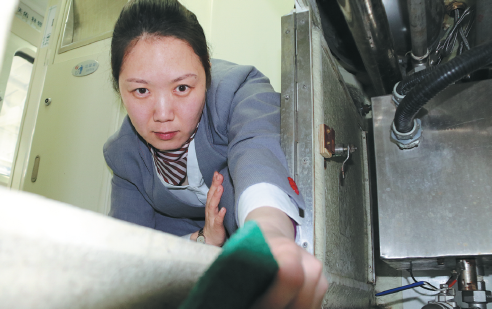 An attendant cleans up on the Qunzhong train. (Photo/China Daily)

Guo, 42, is a conductor on the Qunzhong ("the masses") train, which went into service on May 1,1949. He is quite proud of the fact that the train service is almost exactly the same age as the People's Republic of China.

Over the past seven decades, with refurbishments and upgrades, it has changed from a slow "green train" service to a high-speed one with modern rolling stock, air conditioning and comfortable seats.

Guo said after reading the history of the train and hearing stories from old employees he has a good idea of its original condition.

"Most windows were boarded up and train attendants had to take gas lamps when they checked the tickets because most lights in the carriages didn't work," Guo said.

"There were no sleeping cars, no dining cars, no water and no heating provided in the train. Furthermore, it took more than 30 hours to finish the 460 kilometer leg between Jilin and Shenyang (in Liaoning province)."

With the rapid development of China's railway network, the 1,100 km rail journey from Jilin to Beijing has been cut from 60 hours 70 years ago to 11 hours today.

Li Jinghua, one of the first conductors, recorded many stories of what happened on the Qunzhong in his diaries, said his 63-year-old son, Li Wenqi.

The late Li Jinghua worked as both a conductor and announcer on the train, his son said.

Besides tending to passengers in three carriages, Li Jinghua broadcast the latest current affairs, policies and rail-travel safety procedures, all of which were well-received by the passengers.

Whenever the travelers encountered problems on the train - especially the elderly, the ill, the disabled and pregnant - Li and his colleagues tried their best to help them.

"My father kept writing down both trivial and common matters about serving the passengers," Li Wenqi said.

"However, in my eyes, the stories show the spirit of the first generation of rail workers like my father. I will preserve the diaries and pass them on to my children."

In Sept 1950, Li Jinghua got the chance to meet Chairman Mao Zedong in Beijing when he was recognized as a national model worker.

His spirit of selfless service to passengers has been passed on to other train workers over the decades.

After a magnitude 7.8 earthquake hit Tangshan in Hebei province in 1976, a rescue team including medical workers and Qunzhong rail staff immediately set off to the disaster area. They helped transfer about 1,500 wounded people to different hospitals in the cities of Jilin and Yanji in Jilin province.

With the improvement of conditions on the train, the rail workers began to face less tough times around 2000, but they never forgot their commitment to the passengers.

Yu Jinbao, a former conductor on the train, had an unforgettable experience in March 2006.

It was the Lantern Festival and many passengers on the train planned to return to Beijing for work, but the train was delayed for nearly 40 hours because of heavy snow, he said. At the Heishan Railway Station in Liaoning province, the train stopped moving again.

"At that time, passengers became emotional and anxious," he said."Moreover, food and water on the train were in short supply."

There were more than 1,000 passengers and Yu was worried about the situation.

However, the train staff learned there was a small store 1 km from the railway station, and Yu and several attendants trudged through meter-deep snow to get provisions.

They brought back food and bottled water and distributed them to those most in need.

In April 2011, while patrolling the train after it had departed from Beijing, conductor Xu Hong came across a sad-looking mother and her baby, who was wrapped in medical gauze.

The passenger told Xu that she had planned to seek treatment in Beijing hospitals for her 2-month-old baby who had been severely scalded, but she couldn't afford the high costs and had to return home.

Xu broadcast her story over the train's speakers and called for donations for the mother and her baby.

Within half an hour, 6,000 yuan ($928 at the time) had been collected from rail workers and passengers and given to the mother.

"She kept walking around the carriage, laughing and crying by turns," he said."I tried to chat with her and found she had suicidal thoughts due to failed love affairs."

He took away the pills and kept trying to pacify the woman who eventually calmed down.

Ma then contacted the passenger's family and handed her over to her relatives when the train arrived at Beijing Railway Station.