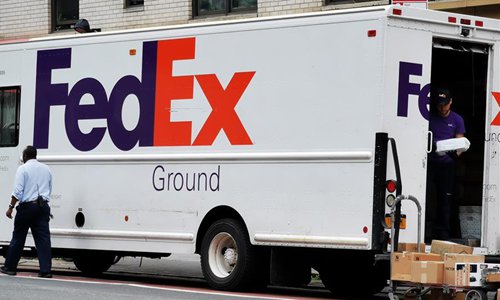 Police in East China's Fujian Province confiscated a FedEx package sent from the U.S. that contained a gun, a violation of China's gun-control laws.

Authorities in Fuzhou's Jin'an district issued a statement Sunday afternoon on its Sina Weibo account that a local sporting goods company notified the police after receiving the package. An investigation was immediately launched.

The statement did not provide further details, nor explain how the package made it through customs.

China's laws and regulations forbid mailing various items, with weapons and ammunition at the top of the list.

According to law, mailing weapons is a criminal offense and usually carries a prison sentence between three and 10 years, and in some cases could result in the death penalty.

Regardless of U.S. laws on mailing firearms, shipping companies must follow Chinese laws when sending packages to China, said Zhi Zhenfeng, a legal expert at the Chinese Academy of Social Sciences, told the Global Times on Sunday.

FedEx, as one of the world's top delivery services, is obliged and capable of preventing dangerous contraband from entering the country, Zhi said.

Also, China's customs, which allowed the package to enter the country should be partly responsible for failing to intercept it, Zhi noted.

FedEx had yet to issue a response as of press time.

This is not the first time FedEx has been suspected of violating Chinese laws and regulations.

The delivery carrier sent two packages from Japan, addressed to Huawei China, to the U.S., and later attempted to divert two packages from Vietnam meant for Huawei offices but were sent elsewhere in Asia without authorization in May.

According to the Ministry of Commerce, China's entity list is under revision, and analysts believe that FedEx will be added first due to the company's multiple violations within China's territorial jurisdiction.