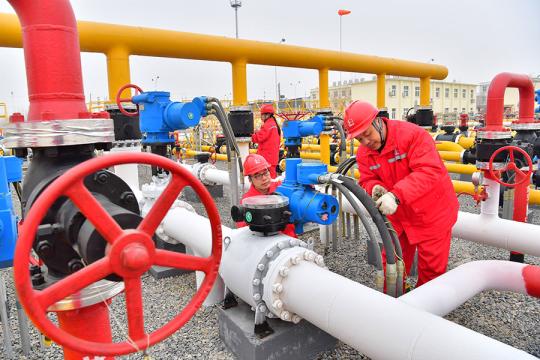 China is expected to become the largest energy storage market on a cumulative basis by 2023, surpassing the United States and leading the global market through to 2040, thanks to rising market demands and policy support, said a new report.

According to a Bloomberg New Energy Finance report, China's annual energy storage deployment exceeded 1 gigawatt-hour for the first time in 2018 and is slated to double this year on the back of steady growth.

"The market is mainly driven by rising demand. Major power grid projects in regions such as Henan, Hunan and Jiangsu provinces took up nearly half of the newly created market share, and every project is at 100-megawatt level, which calls for bids. Besides, the price of batteries is continuously declining, making it profitable for manufacturers," said Li Daixin, an analyst at Bloomberg New Energy Finance, and one of the authors of the report.

Deployments for transmission and distribution-level applications made up 43 percent of China's newly commissioned capacity in 2018. The projects are distributed across load consumption centers and power resource centers.

Frequency regulation projects are also remarkably profitable in China at the moment. "This is due to emerging regional markets. Increasing technical know-how from a variety of participants is also helping," said Li.

Opportunities for commercial and industrial peak-valley power price arbitrage are spurring uptake for behind-the-meter energy storage in China, the report said. Local equipment manufacturers have typically developed these projects. As the market becomes more attractive, it is attracting interest from a more diverse pool of developers.

In terms of technology mix, lithium-ion was the technology of choice in 2018, with lithium-iron-phosphate (LFP) batteries particularly in favor. Many procurement tenders specify LFP because it is viewed as safer than other lithium-ion technologies. Low-cost lead-based batteries and long-duration flow batteries have helped diversify the technology mix of China's storage market. However, both are dwarfed by lithium-ions in terms of the potential economies of scale and their use across different applications.

Specifically, the report forecast that China will become the largest energy storage market on a cumulative basis starting in 2023, surpassing the US and leading the global market through to 2040.

Li noted that one of the reasons behind this is the national-level policies. In October 2017, the government issued a guidance on promoting energy storage, giving a strong impetus to grid operators, battery companies and others to open up new businesses in energy storage.

With the introduction of the guidance, both national and regional governments and two grid monopolies are planning to launch energy storage pilot projects, which will further promote and verify the technical and economic feasibility of energy storage in wider application areas.

"Although the government is unlikely to grant special funds to pilot projects, these projects are creating momentum in the market, especially for application areas with weak economies," said Li.

Besides, according to the report, despite leading the global markets for lithium-ion battery production and electric vehicles, China is accelerating the research, development and demonstration of technologies specially designed for energy storage.

In 2016, the Ministry of Science and Technology rolled out a plan to support two to four energy storage technical directions, each with a research and development period of five years. The issued projects have covered advanced battery technologies and physical technologies, as well as system-level 100-MW applications and second-life demonstrations.

Han Xiaoping, chief information officer of China Energy Net Consulting, said that China's energy storage market is rapidly developing because of the lower costs for energy storage batteries. "The cost of a lithium battery has dropped to 1,200 yuan ($180) per kilowatt, and the cost of other types of battery, such as lead-based batteries and flow batteries, also dropped rapidly."