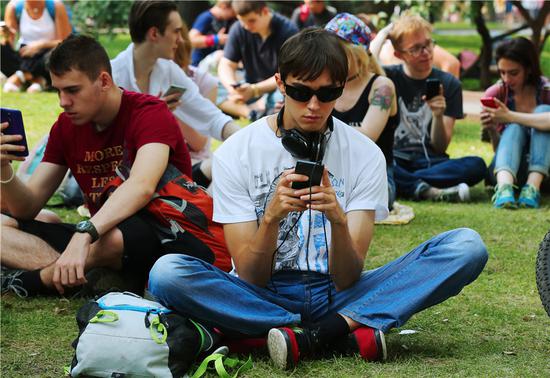 People use their mobile devices at a park in Moscow. (PHOTO PROVIDED TO CHINA DAILY)

China's booming mobile games sector is gaining traction in overseas markets, as game developers seek to make massive gains in markets with rising mobile internet usage and demographic advantages, according to a report released on Monday by App Annie.

Gaming app publishers reported 1.5 billion overseas downloads via Google Play and iOS App Store in the first half of 2018, compared with 1.1 billion in the same period last year, according to App Annie's data.

The report said China saw a slowdown in first-half domestic mobile game revenues, proving overseas expansion is a necessity for Chinese publishers. China's iOS game revenues grew by only 2 percent year-on-year in the first half of the year, compared to 83 percent in the same period last year.

The report showed that emerging markets, especially the Asia-Pacific region, are a stronghold for top overseas markets in terms of downloads, including India, Indonesia, Brazil and Vietnam.

Notably, India has surpassed the United States to become the largest mobile game market by downloads in the first half of 2018. Chinese game publishers have seen their downloads jump by 89 percent year-on-year on Apple's and Google's Indian stores in the first six months of the year.

According to App Annie, most of Chinese game publishers' overseas revenues are from developed markets such as Japan, South Korea and Germany.

By the end of June, more than 200 Chinese mobile game apps had been downloaded more than one million times around the world, each earning over $1 million globally.

"This year will be a critical juncture for transformation. As leading game companies are early ventures in the overseas markets, new ventures, especially small and medium-sized firms, need to accelerate their steps to expand globally," Zhang said.