A researcher from the Institute of Geology and Geophysics of the Chinese Academy of Sciences (IGGCAS) analyzes lunar samples returned by China's Chang'e-5 mission in Beijing, capital of China, Oct. 14, 2022. (IGGCAS/Handout via Xinhua)

A Chinese group analyzed lunar samples returned by China's Chang'e-5 mission and proposed a new mechanism for how young volcanos took shape on the cooling moon 2 billion years ago.

Scientists previously speculated that the elevated water content or radioactive elements in the lunar interior might have driven volcanism in the late stage of the moon's life. But the Chang'e-5 data found its mantle source region both dry and lacking in heat-producing substance.

The study published on Saturday in the journal Science Advances showed that the mantle melting-point depression due to the presence of fusible, easily-melted components could generate young lunar volcanism.

The researchers from the Institute of Geology and Geophysics of the Chinese Academy of Sciences (IGGCAS) scrutinized 27 Chang'e-5 basalt clasts to calculate the original ingredients of those samples.

They found that the young Chang'e-5-source magma might have higher calcium oxide and titanium dioxide contents than magmas in older samples returned by the Apollo Missions.

China's Chang'e-5 probe has revealed surprisingly young volcanic activity, only 2 billion years old, ruling out the theory that the moon has been geologically dead after the formation of Apollo samples at least 3 billion years ago.

"Recent lunar mantle melting can be achieved by either raising the temperature or lowering the melting point," said the paper's corresponding author Chen Yi, an IGGCAS researcher. 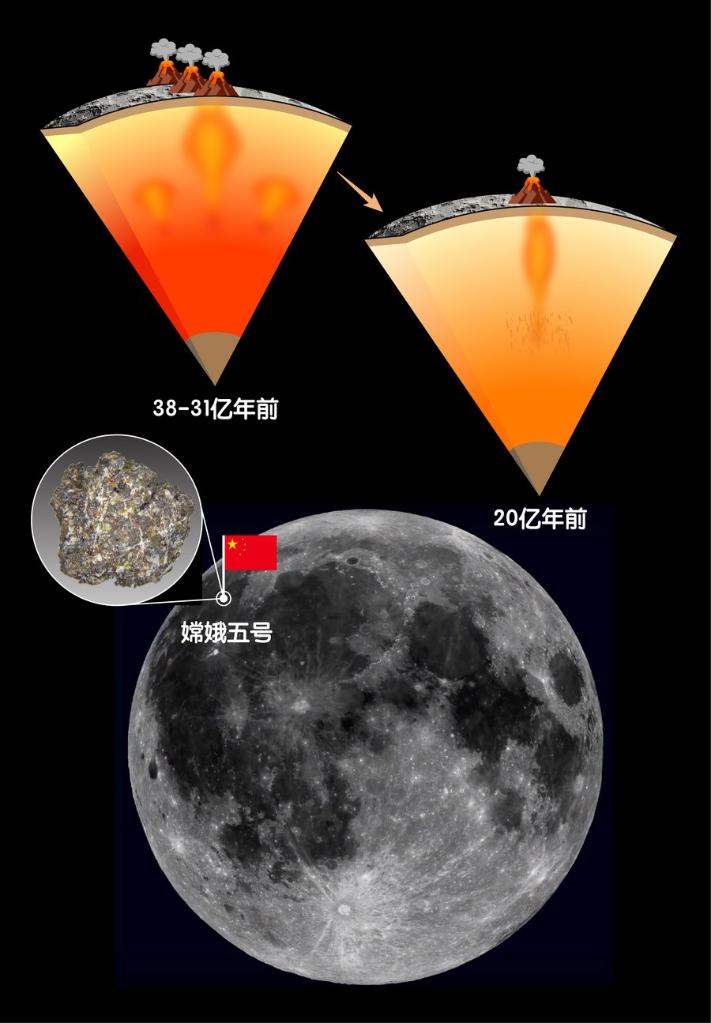 This diagram made on Oct. 20, 2022 shows the moon's thermal and magmatic evolution. (IGGCAS/Handout via Xinhua)

The study shows that the late-stage lunar magma ocean cumulates in Chang'e-5 samples are rich in calcium and titanium. It melts easier than early cumulates.

The scientists proposed that those fusible components added to the lunar interior could have efficiently reduced the mantle melting temperature and thus triggered the young lunar volcanism.

"We discovered that the Chang'e-5 magma was produced at similar depths but 80 degrees Celsius cooler than older Apollo magmas," said the paper's first author Su Bin from IGGCAS.

"That means the lunar mantle experienced a sustained, slow cooling of 80 degrees Celsius from some 3 billion years to 2 billion years ago," said Su.

The work presents evidence for a viable mechanism to account for young volcanism on the moon that is compatible with the newly returned Chang'e-5 samples, according to the researchers.