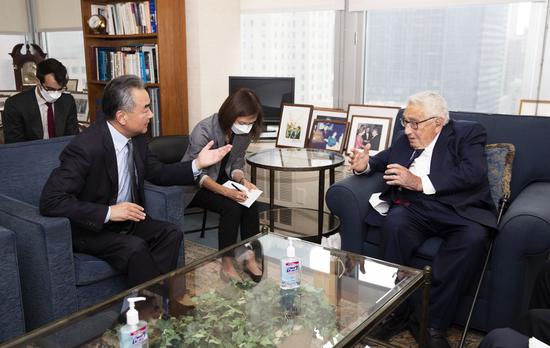 Wang congratulated Kissinger on his upcoming 100th birthday, calling him an old and good friend of the Chinese people, who has made historic contributions to the establishment and development of China-U.S. relations.

Wang stressed that the Chinese side appreciates the fact that Kissinger has always been friendly to China and has confidence in China-U.S. relations.

Wang expressed hope that Kissinger will continue to play a unique and important role and help bilateral relationship get back on track as soon as possible.

This year marks the 50th anniversary of former U.S. President Richard Nixon's visit to China and the issue of the Shanghai Communique, Wang said, adding that China and the United States should earnestly sum up the conducive experience of 50 years of exchanges.

Stressing that China's policy toward the United States has maintained continuity and stability, Wang noted that Chinese President Xi Jinping has put forward the three principles of mutual respect, peaceful coexistence and win-win cooperation between China and the United States.

They are not only the accumulation of 50 years of experience in bilateral relations, but also the basic principles that should be jointly followed in the next step of development, Wang underlined.

However, what the United States has done is contrary to the commitments, Wang added.

Out of a wrong perception of China, the United States insists on viewing China as its main rival and a long-term challenge, and some people have even described the success of China-U.S. exchanges as a failure, which respects neither history nor themselves, Wang said.

Kissinger once warned that China-U.S. relations are already in the "foothills of the Cold War," Wang noted.

The outbreak of a "new Cold War" between China and the United States will be a disaster not only for China and the United States, but also for the whole world, Wang cautioned, adding that the U.S. side should return to a rational and practical China policy, return to the right track of the three China-U.S. joint communiques, and maintain the political foundation of bilateral relations.

Wang stressed that the top priority now is to properly manage the Taiwan question, otherwise it will have a subversive impact on China-U.S. relations.

U.S. House Speaker Nancy Pelosi's visit to Taiwan, the deliberation of the "Taiwan Policy Act of 2022" in the U.S. Senate, and the remarks on supporting Taiwan's defense have all seriously challenged the three China-U.S. joint communiques and seriously undermined the political foundation of China-U.S. relations, Wang said.

It is China's top wish to realize peaceful reunification, which the Chinese people will do the utmost best to achieve, Wang said, adding that it must be noted that the more rampant "Taiwan independence" is, the less likely the peaceful resolution of the Taiwan question would be.

If the Anti-Secession Law is violated, China will take resolute actions in accordance with the law to safeguard the country's sovereignty and territorial integrity, Wang said, stressing that in order to maintain peace and stability in the Taiwan Straits, the United States should seriously return to the original meaning of one China, and clearly oppose and curb "Taiwan independence".

Kissinger recalled the history of reaching the Shanghai Communique with then Chinese leaders, and said that the extreme importance of the Taiwan question to China should be fully understood.

The United States and China should have dialogue rather than confrontation, and should build a bilateral relationship of peaceful coexistence, he said.