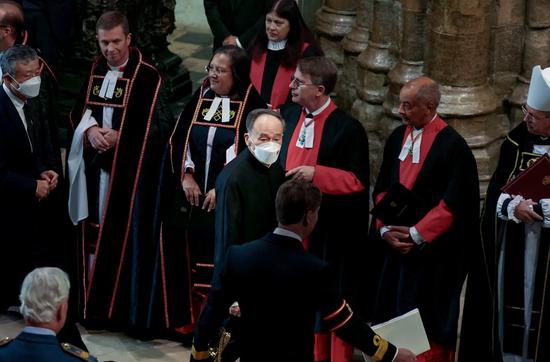 On Sunday afternoon, Wang paid tribute to the Queen lying in state at Westminster Hall. On Monday morning, he attended the state funeral for the Queen held at Westminster Abbey, together with heads of state from various countries, members of the royal family and government representatives.

Wang told the British side that at a time when Britain is in national grief following the Queen's death, Xi appointed him as the Chinese president's special representative to attend the funeral in London.

As Britain's longest-reigning monarch, Queen Elizabeth II witnessed the changes of the times and was a symbol of British national spirit and cohesion, said Wang, adding that the Queen was deeply loved by the British people and had made important contributions to the development of China-Britain relations.

King Charles III conveyed a message to the Chinese side, thanking and welcoming Wang's attendance at the Queen's funeral as the special representative of Xi.

He said that the British royal family cherishes the friendship with Chinese leaders very much, attaches importance to the development of Britain-China relations, and hopes to continue to cooperate with China in sustainable development and other fields in the future.

The work of the new British government is underway, and the government hopes to further strengthen cooperation with China in such areas as economy and trade, environmental protection, climate change and multilateral affairs, Coffey said.