(W.E. Talk) Will China still be the 'world factory' and 'world market' in the future? 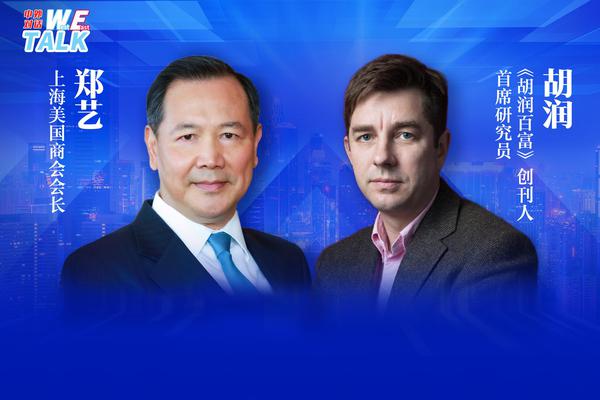 (ECNS)-- Based on the preliminary estimates of the National Bureau of Statistics of China, the gross domestic product (GDP) was 121,020.7 billion yuan ($ 17,871 billion) in 2022, up by 3.0% calculated at constant prices. Economic growth is faster than in many major economies. Meanwhile, however, China had fewer people at the end of last year than in 2021.

Will China still be the world factory and the world market in the future? How will elements including the global pandemic, geopolitical competition, and the ongoing China-U.S. trade war influence how companies in both countries perceive and plan the markets in China and the U.S.?

In the latest W.E. Talk, Eric Zheng, president of the American Chamber of Commerce, Shanghai and Rupert Hoogewerf, chairman and the chief researcher of the Hurun Report were invited to share their opinions.

Eric Zheng holds that U.S. companies will certainly continue to see China as the top strategic market. China is very competitive in its manufacturing capabilities so it will continue to be the world factory for many years to come.

Rupert Hoogewerf believes that foreign companies still have a strong interest in investing in this market. These foreign companies make long-term strategies as they value the Chinese market rather than "earning a quick buck and go”.

Here are excerpts of the dialogue.

Strong interest in investing in China

China News Service: How do American and European enterprises see their own development in China?

Eric Zheng: The U.S. still has an inflation issue, a serious issue. The level's very high, the highest in the past four decades. The Fed has been very aggressively increasing interest rates, trying to robust labor market with very low unemployment rates.

Now, U.S.-China relations certainly have a lot of tensions. Unfortunately, there are quite a few legislative bills being discussed all targeting China. But for U.S. companies, certainly they continue to see China as a very important strategic market for them that includes many AmCham members.

China News Service: The latest data from China's Ministry of Commerce shows that actual U.S. investment in China grows by 26.1% in the first half of this year, which is actually a very high figure. What's your interpretation of this data?

Rupert Hoogewerf: I've seen the data that's been a strong interest in new investment in China. But if you get back to this top 100 large foreign and Hong Kong, Macau, and Taiwanese companies, Top 100. The average history that these companies have with the Chinese Mainland is 57 years. The average of foreign companies in China is actually 91 years old. So there are probably about 15, or 20 companies that have over 100 years of history with China.

These companies have a very long-term strategy because you've got an important market here for them. And they can actually add value here as well. So they feel they can make a contribution as well. So perhaps the thing that struck me the most was this longevity and this long-term view of these companies. It's not a matter of "I'm just gonna be here make a quick buck and go". Yes, some companies do that, but not these Top 100 companies.

Eric Zheng: Certainly, U.S. companies that are indicated before continue to see China as the top strategic market. And many of our members, AmCham members have been here for years and they've made a long-term investment in this country. And this is not just part of the global supply chains anymore. China has such a tremendous market with a lot of potential. So they are here to sell to China, the China market. I think from that standpoint, you continue to see strong foreign interest in investing in this market.

China News Service: So what is the current sentiment in Washington regarding U.S.-China relations? And how will these bilateral relations impact the business and environments in both countries?

Eric Zheng: That's really unfortunate that there is kind of a consensus view in the U.S. that China should be treated as a strategic competitor. So that's the starting point. So all the policies will be built around that. In the past, usually, China-bashing was during the political campaign season, but now it's all year round, unfortunately. So that's not good for the bilateral commercial relationship.

We always think that commercial interactions, and exchanges, are good for both countries. Actually, it's good for China. It's good for the U.S. to have Chinese investors in the U.S. It's really helpful for the U.S. economy. It creates jobs. It certainly brings tax revenues, and it helps consumers, for sure. But the political environment is such that at this point, the focus is more on protecting its own market. Now I think we are in this transition with very protective policies going on in the U.S. So I think it will take a while before things will clear up. So I think Chinese companies have to really figure out what to do next. But from U.S. companies' standpoint, we would love to continue to work with Chinese companies, both ways in developing our markets in China, as well as welcoming Chinese companies to do well in the U.S.

China News Service: Could commercial relationships serve as one of the guardrails? Can we say that the business community can actually somehow do anything to make the relations better?

Eric Zheng: Commercial relations have always been a cornerstone of U.S.-China relations. Trade and investment between our two countries have seen tremendous growth and have played a hugely important role in strengthening our bilateral relations.

China will still be the world factory in the future

China News Service: The documentary, American Factory, has aroused debates in both China and the United States. The chairman of Fuyao Group, Cao Dewang, in an interview with the Chinese media, compared the manufacturing cost in both countries. And such comments also became really heat on Chinese social media. And so I want to ask both of you that will China still be the world factory in the future? Have the positions of China and the U.S. in the industry chain and value chain been changed?

Eric Zheng: Certainly China began as a low-cost manufacturing base, really relying on certainly inexpensive labor and so forth and became the world factory floor. The U.S.-China trade war began in 2018 when the U.S. side imposed higher tariffs on Chinese products. So manufacturers in China had to come up with alternatives. They had to move some operations to other countries, third countries like Vietnam. After the lockdown. And companies are beginning to think about what to do with their global supply chain strategy.

But from a Chinese perspective, actually, you don't want to remain as a low-cost manufacturing base only. I think there is a consensus that is to move up the value chain, to really move away from labor-intensive, low-cost, full-pollution, energy-heavy, operations to more high-end manufacturing. So this is actually in China's interest, to move to higher value-added manufacturing.

China News Service: In 2013 in Beijing, Mr. Hoogewerf mentioned that China, including the Chinese mainland, Hong Kong, Macau and Taiwan, has already had the most billionaires who own assets worth more than $1 billion around the whole world. However, there's still room to raise the rate of Chinese businesses participating in philanthropic works. So after almost 10 years, which kind of progress have you seen in this area? And what can we learn from our counterparts?

Rupert Hoogewerf: It's something that we've been tracking very very closely. And the general trend, it's a worldwide problem, is that wealth is being created right now so fast that they can't give away faster.

We just did a recent report on the world's biggest philanthropists of the last century. There were a few Chinese on that and say, you've got the likes of Cao Dewang who's given over a billion U.S. dollars. You've got some real estate developers, you've got even Shao Yifu who's passed away as a famous Hong Kong philanthropist. And there are tax advances of donating in America, versus China. But at the core of it is how you deploy that capital efficiently and in a not-for-profit way.

Eric Zheng: I have no doubt there will be more Cao Dewangs and more Bill Gates in China going forward in this area. There's no doubt about it. And I think obviously, the U.S. has a longer history with a more kind of established system to support charity activities, I think, as Rupert just mentioned. You need a conducive tax regime to support business people to make more charity donations.