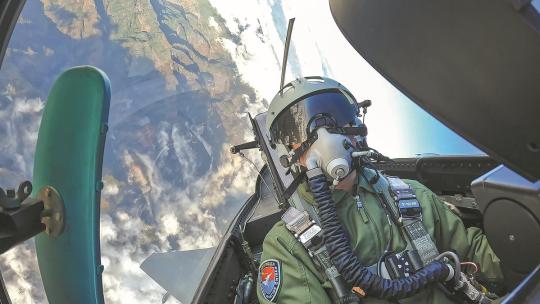 The battle group of the CNS Shandong aircraft carrier recently carried out a combat exercise in the South China Sea to open its annual training operations, according to the People's Liberation Army Navy.

Several J-15 fighter jets took part in an air-defense drill to intercept "incoming enemy aircraft", and pilots conducted a series of sophisticated tactical maneuvers before locking on their targets and simulating missile strikes, the PLA Navy said in an article on its WeChat account.

During the exercise, which involved warships, aircraft and submarines, the Shandong battle group honed the capabilities of its sailors and aviators to engage in joint, multi-domain operations, the article said, adding that a team of new naval aviators were certified for night operations on the J-15 after taking part in the exercise.

The Shandong — China's second aircraft carrier and the first wholly designed and built in the country — displaces at least 50,000 metric tons of water. It has a conventional propulsion system and uses a ramp to launch J-15s, the spearhead of the Chinese carrier force.

Commissioned in December 2019 to the South Sea Fleet, it is the largest and most sophisticated naval ship in the PLA Navy.

Photos published along with the article showed the Shandong's deck crammed with J-15s and such fighter jets taking off from the carrier at night.

It is a real test for a carrier battle group to deploy a large number of aircraft, ships and submarines in the open sea because such a move usually involves a lot of planning and collaboration and must be executed by well-trained officers, sailors and pilots, he said.

"We can see that the Shandong battle group has a lot of experience and know-how on complex maneuvers. And I am sure Chinese carrier groups will sail farther soon to do their training," Wu said.

Meanwhile, over the past two weeks, several group armies with the PLA Ground Force have held opening ceremonies for their annual training sessions. Troops and weapons have been mobilized to conduct live-fire drills across the nation.

The navy's destroyers and frigates have conducted intense battle exercises that have included gun shooting, missile launching, air-defense and anti-submarine tasks and counterterrorism and anti-pirate maneuvers.