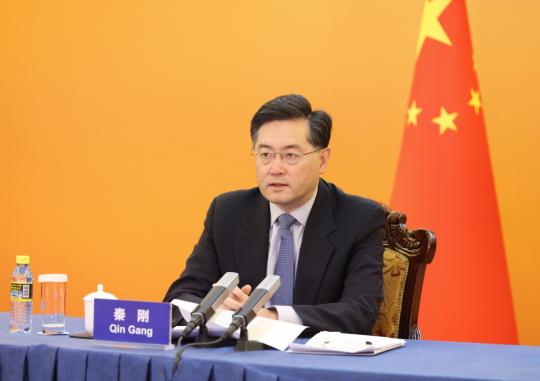 Foreign Minister Qin Gang participates in the opening of the 14th "Love Knows No Borders" international charity sale via video link in Beijing on Jan 17, 2023. (Photo by Feng Yongbin/chinadaily.com.cn)

The opening of an annual major international charity sale in Beijing on Tuesday attracted senior Chinese diplomats, including Foreign Minister Qin Gang, and dignitaries from foreign diplomatic missions based in the country.

They waved and greeted each other via video link to inaugurate the 14th "Love Knows No Borders" international charity sale involving the Chinese Foreign Ministry and diplomatic missions based in China.

Over the past 13 years, the annual events have collected donations by selling commodities such as food and handicrafts provided by foreign diplomats and businesses from home and abroad.

The donations have helped people in poverty-stricken areas and those in fields such as healthcare, education and infrastructure.

Qin noted that under the charity program, a number of assistance projects have been implemented.

"It has remained true to its original aspirations and contributed to the success of eradicating absolute poverty, and it is now supporting rural vitalization," he said. "Many children have seen their dreams come true, and many families have been given a new sense of hope."

He quoted a Chinese adage saying that, "A just cause gains great support, and the whole world is one big family".

The charity sale program "is designed to spread love and usher in a better future, and more importantly, it aims to pass on and carry forward the spirit of solidarity and mutual assistance — a spirit that transcends borders", he added.

Foreign diplomats said via video link that the charity program echoes China's efforts to achieve common prosperity, which is a "key, distinct characteristic" of the Chinese path to modernization.

Under the leadership of the Communist Party of China, the nation "has achieved phenomenal success in poverty alleviation, and has attained extraordinary results in transforming the livelihoods of its people", said Ali Obaid Al Dhaheri, the United Arab Emirates' ambassador to China.

"I'm fortunate to have glimpsed through the window of these achievements during my many visits to some of the most remote areas of the country," he said.

"I have no doubt that China's rural vitalization drive will proceed with impressive speed and yield transformational results," he added.

"People from around the world can engage in this initiative while appreciating the diverse cultures of producing countries," he said.

Akram Zeynalli, Azerbaijan's ambassador to China, said he commended China's efforts, "which are really directed to rural vitalization", and the charity sale will better help achieve that goal.

"China now is leading a path, which I think, is a good example for other countries to follow, to fight poverty among our communities," said Omer Mohamed Ahmed Siddig, Sudan's ambassador to China.

This year, there will again be online and livestreaming charity sales, and netizens can access the special webpage of the charity sale on the Taobao app until Feb 8.

Official accounts of the sales on media platforms such as WeChat, Douyin, Kuaishou and Bilibili will continue issuing short videos. Foreign diplomats in China will talk about their participation in the charity sale and promote the culture and products of their countries.

The donations this year will be used for installing and upgrading shower facilities for elementary and middle schools in Malipo and Jinping, two counties in Yunnan province.