Nation books for growth amid headwinds 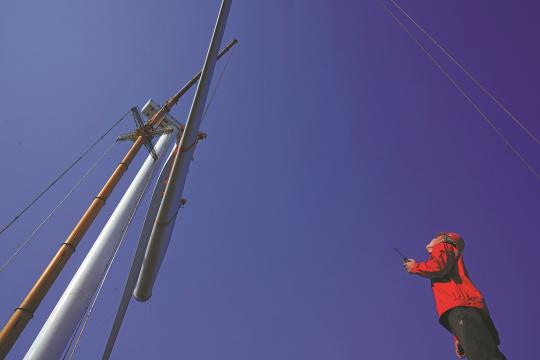 A technician supervises the installation of a wind turbine in Liuzhou, Guangxi Zhuang autonomous region, on Jan 10. (Photo by Long Tao/For China Daily)

While multiple pressures and headwinds may weigh on China's short-term outlook, the optimized COVID-19 control measures and stronger policy support will lead to a notable rebound in 2023, according to Lin Jianhai, former secretary of the International Monetary Fund.

"China's growth potential remains strong but the country continues to encounter headwinds that must be overcome. The good news is that China has the ability to counteract growth headwinds within its policy space. Macroeconomic policy support can boost near-term growth," said Lin, who is also vice-president of the International Finance Forum.

"The economy will likely remain difficult in the first few months of the year. But growth, particularly in consumption, is expected to pick up from the second quarter onwards as COVID waves subside," Lin added.

China's economy had a challenging year in 2022, mainly due to COVID outbreaks that affected mobility and economic activity, as well as business and consumer confidence, and weak performances in real estate and other sectors also weighed on the economy.

China's economy expanded by 2.9 percent year-on-year in the fourth quarter, compared with 3.9 percent in the third quarter, data from the National Bureau of Statistics showed.

To revive the COVID-battered economy, Lin said it is critical to restore the confidence of firms and households in the short term.

"This includes, among other priorities, continued policy actions to address the ongoing real estate difficulties and minimize the potential for spillovers to other sectors and adverse macro-financial feedback loops," he said. "It also includes actions to spur private sector activity and make it an engine of growth in the long run."

Looking into the future, he said structural reforms must be accelerated to lift growth potential.

"Pro-growth reforms, such as a further opening-up of domestic markets and ensuring market neutrality between private sector firms and State-owned enterprises, will help shore up low productivity growth at a time of shrinking labor supply."

When it comes to China's intensified efforts to pursue high-quality development and foster sustainable, inclusive and green economic growth, Lin said the country must make the right policies in several aspects, including maintaining a stable macroeconomic environment as well as continuing and further strengthening opening-up policies and efforts.

"China has been a key beneficiary of and contributor to globalization in the past four decades, and it will likely play an increasingly important role going forward," he said.

He said that can be done through technological development and application, cultivation of more talent, strengthening of research and development capabilities, more transparent and reliable rules and regulations, and better allocation and use of resources.

"In this context, leveling the playing field between State-owned and private-sector firms can go a long way to enhancing productivity growth," he said.

Looking ahead, Lin said more efforts should also be made to further develop the financial sector and effectively address the impact of demographic shifts.

Meanwhile, Lin warned that China's working-age population has already been declining, saying it is advisable for the country to gradually raise the retirement age to 65 for both male and female workers, continue improving the quality of the labor force through education and on-the-job training and address vocational training.