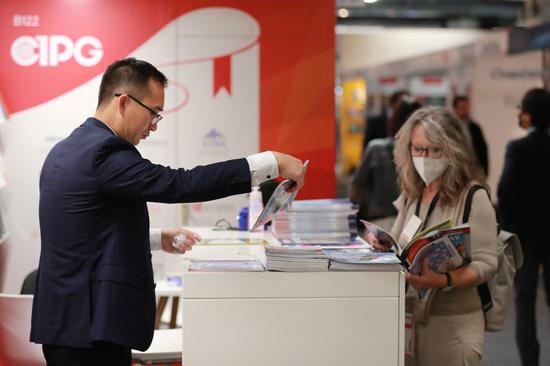 For people who are eager to get a better understanding of China, the Chinese booths at the ongoing Frankfurt Book Fair presented opportunities for them.

"I visit the Chinese booths at the Fair every time, and plentiful of selected Chinese books never fail to help me to know better about different aspects of China," Charlottes, who works in the culture industry in Belgium, told Xinhua.

In order to meet the needs of visitors like Charlottes, the China International Publishing Group and China National Publications Import and Export Co., Ltd. have brought together over 100 publishing companies in China to attend the event, regarded as the largest of its kind, this year.

More than 1,000 different kinds of publications were exhibited on the shelves of the Chinese booths, covering topics of politics, economics, culture, history, technology and the Chinese language, for adults and children as well.

Rosenmarie Stefan, whose curiosity about China has been built up since she took a few courses about China in a community school, is looking for something about China that would be different from the reports of the local press.

The local media's coverage of China is far from enough for people to know a big country, she said.

As a consultant in Frankfurt, Dirk Schneider has been cooperating with Chinese companies for over 20 years, and he prefers books about Chinese politics and economics. "I am keen to know more about the New Silkroad and would like to find some publications about it."

An increasing number of Chinese books have been published abroad in the past few years, said Ren Lei, chief representative of the German representative office of China National Publications Import and Export (Group) Co., Ltd.

Books about children's education, novels authored by well-known Chinese writers, Chinese philosophy and Chinese medicines are especially popular among readers in Europe, according to Ren.

The Frankfurt Book Fair, scheduled for Oct. 18-23, drew more than 4,000 publishing companies from 95 countries and regions.