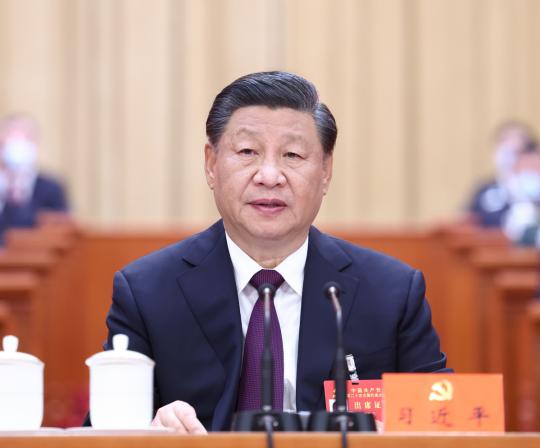 Xi Jinping presides over the closing session of the 20th National Congress of the Communist Party of China on Saturday in the Great Hall of the People in Beijing. (JU PENG/XINHUA)

A new central leadership of the Communist Party of China was elected on Saturday at a key Party congress that adopted a blueprint for the nation's development for the coming five years and beyond, as well as an amendment to the Party's Constitution.

The new CPC Central Committee was elected by delegates and specially invited delegates at the closing session of the weeklong 20th CPC National Congress, presided over by Xi Jinping. The new central leadership is comprised of 205 members and 171 alternate members.

"Thanks to the concerted efforts of all delegates, the congress has been a complete success, and we have realized our goals of unifying thinking, fortifying confidence, charting our course, and boosting morale," Xi said while addressing the closing session.

"This has been a congress of holding our banner high, pooling our strength, and promoting solidarity and dedication."

A new CCDI, with 133 members, was also elected at the congress.

The congress endorsed the strategic plans set out in the report of the 19th CPC Central Committee for advancing the cause of the Party and the country in the period to come.

Xi said the report of the 19th CPC Central Committee is a political declaration and a program of action for the Party to rally and lead the Chinese people of all ethnic groups in securing new victories for socialism with Chinese characteristics.