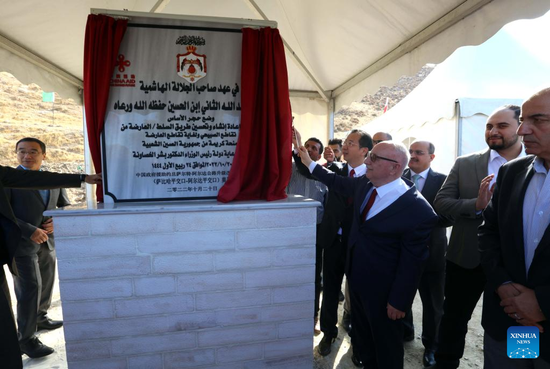 Officials from Jordan and China attend a foundation-laying ceremony for a China-funded road project in Al-Salt, Jordan, on Oct. 20, 2022. (Photo: Xinhua/Mohammad Abu Ghosh)

The project of upgrading and rebuilding the Al-Salt/Al-Ardah Road in Jordan, which is funded by the Chinese government, broke ground on Thursday.

During the foundation-laying ceremony held at one end of the road, Chinese Ambassador to Jordan Chen Chuandong said the project would improve the road condition, boost logistics efficiency, and promote the development of tourism, industry and agriculture in Jordan.

The project, which is expected to create hundreds of jobs, will help raise the standard of living for Jordanians, he said.

The Chinese envoy said that the road would become a "road of convenience" that facilitates people's movement, a "road of prosperity" that promotes socio-economic development, and a "road of bonds" that deepens the friendship between China and Jordan.

Noting that this year marks the 45th anniversary of the establishment of diplomatic relations between the two countries, Chen said China regards Jordan as an important partner in promoting regional peace and development.

He called on the two countries to build stronger synergy between their development strategies and advance high-quality cooperation under the Belt and Road Initiative to ensure people from both countries benefit from the win-win collaboration.

For his part, Jordanian Minister of Public Works and Housing Yahya Kasbi said the project, which is of great importance for Jordan, is a testimony of the solid relations between the two countries.

The Jordanian government is keen on enhancing ties with China in all areas, he said, stressing that the project will benefit many Jordanians, especially farmers in the Jordan Valley.

Located in northwestern Jordan, the upgrading and rebuilding of the 12.5-kilometers-long four-lane road is expected to be finished in 18 months.