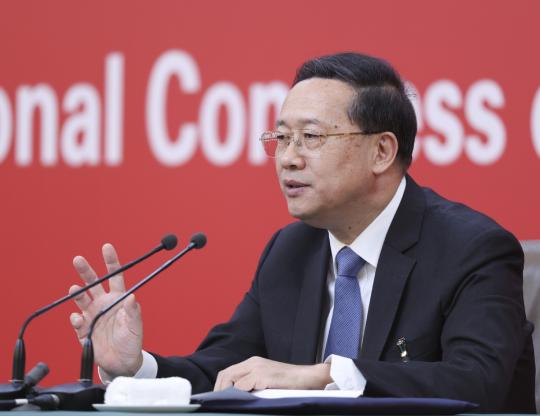 Vice Foreign Minister Ma Zhaoxu speaks at a news conference on the sidelines of the 20th National Congress of the Communist Party of China. (Photo/Xinhua)

China's diplomatic front will continue to carry on the fighting spirit and improve its capability to safeguard the country's dignity and interests, Vice-Foreign Minister Ma Zhaoxu said on Thursday at a news conference on the sidelines of the 20th National Congress of the Communist Party of China.

Ma cited the report delivered by General Secretary Xi Jinping at the opening of the 20th CPC National Congress, saying China has entered a period of development in which strategic opportunities, risks and challenges are concurrent and uncertainties and unforeseen factors are rising.

Given the situation, Ma said China's diplomatic front needs to carry on the fighting spirit to bolster the people's will, courage and confidence, refrain from pressure and containment, brave hardships, strive to consolidate development and security and safeguard the country's sovereignty, security and development interests.

While highlighting China firmly pursues an independent foreign policy of peace, he said the nation will not bow to the might power, and will uphold the justice, resolutely oppose any form of hegemony and power politics.

"Our resolve to safeguard the sovereignty and territorial integrity as well as the fundamental interests of the Chinese nation will be rock hard and unshakable," he added.