HK to align its policies with national strategies 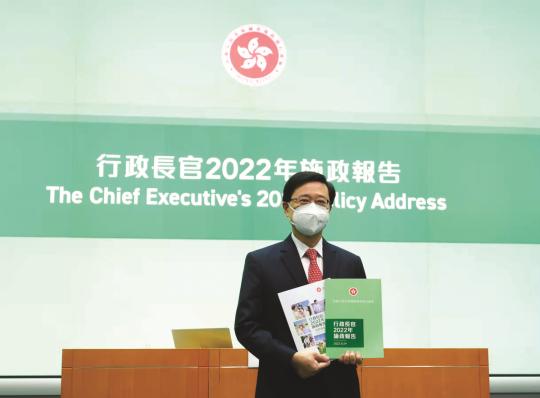 Hong Kong Chief Executive Leo Ka-chiu poses with a copy of his 2022 Policy Address and a booklet providing information about the Policy Address at a news conference on Oct 19, 2022. (CALVIN NG/CHINA DAILY)

Hong Kong Chief Executive John Lee Ka-chiu announced in his debut policy speech on Wednesday that he will lead a high-powered task force to bring the special administrative region further into the orbit of the national economy.

The inception of the Steering Group on Integration into National Development was one of a raft of policy initiatives that Lee unveiled in his policy address to the SAR's Legislative Council.

The mission of the task force, which is made up of top-tier government officials, is to better align the city's strategic moves with national initiatives such as the 14th Five-Year Plan (2021-25) and the development of the Guangdong-Hong Kong-Macao Greater Bay Area.

Establishment of the steering group accords well with the report delivered by Xi Jinping on Sunday at the opening session of the 20th National Congress of the Communist Party of China, which directs the Hong Kong and Macao SARs to dovetail with national strategies.

In response to Lee's policy direction, leading central government agencies such as the Hong Kong and Macao Affairs Office of the State Council and the Central Government's Liaison Office in the Hong Kong reaffirmed support for the further integration of the special administrative region into the national economy.

In the address, Lee emphasized issues ranging from attracting top talent and enterprises amid fierce competition to boosting housing, art development and the city's economy.

The Hong Kong government has announced the relaxation of restrictions on current talent pro-grams and launched a pilot program to offer two-year visas to people earning at least HK$2.5 million ($318,470) or who have graduated from one of the world's top 100 universities.

The Hong Kong government will also refund the extra stamp duty paid by incoming talent on the purchase of residential property in Hong Kong, after they become permanent residents.

Determined to tackle deep-seated land and housing issues, Lee called for building 30,000 new public housing units, increasing the city's public housing supply by about 50 percent in the next five years.

The government will also shorten the waiting time for public housing from six to 4.5 years, and cut the time for turning "primitive land "into "spade-ready sites" by one-third to half, Lee said.