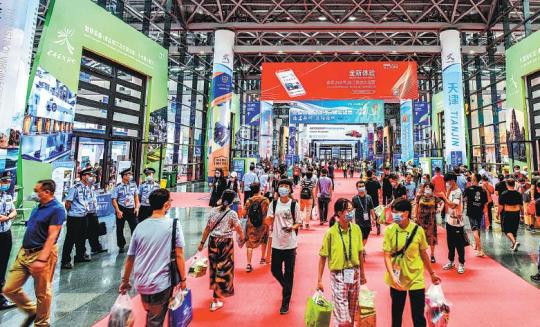 Regional ambassadors to China have spoken highly of China-ASEAN cooperation at a recent expo amid hopes the two sides can further explore economic and trade opportunities under the Regional Comprehensive Economic Partnership, or RCEP.

The 19th China-ASEAN Expo, or CAEXPO, was held from Sept 16-19 in Nanning in South China's Guangxi Zhuang autonomous region.

With the theme Sharing the New Opportunities of the RCEP, Building A Version 3.0 China-ASEAN Free Trade Area, this year's expo comes as the China-ASEAN comprehensive strategic partnership and the start of the RCEP are still within their first year.

Malaysia is the country of honor for this year's CAEXPO and its ambassador to China, Raja Nushirwan Zainal Abidin, said the relations between Malaysia and China are "very strong".

The ambassador highlighted that trade between the two countries amounted to $176.8 billion in 2021, a year-on-year increase of 34.5 percent despite the pandemic.

He also said he expects greater people-to-people connectivity in the future, which will translate into strengthened relations.

Raja Nushirwan said the number of Chinese students registered in Malaysia has reached 28,500, compared with 18,000 students before the pandemic.

Indonesian Ambassador to China Djauhari Oratmangun said the country believes that open regionalism is important as a platform for international cooperation, especially in supporting the ASEAN-China comprehensive strategic partnership, which has so far been realized through the implementation of the ASEAN-China Free Trade Agreement.

He said the China-proposed Belt and Road Initiative and Indonesia's Global Maritime Fulcrum share the goal of common development and promoting regional connectivity.

Djauhari spoke of the synergies arising from the two initiatives in matching Indonesia's abundant resources with China's cutting-edge technology.

Mutually beneficial cooperation between Laos and China has set an example for the region and beyond, said Lao Ambassador to China Khamphao Ernthavanh.

"Our cooperation projects, such as the Laos-China Railway, have brought tangible benefits to both countries," said Ernthavanh, adding that China has invested $16 billion into 833 projects in Laos.

Kyaw Soe Thein, the consul-general of Myanmar in Nanning, said: "The ASEAN-China bilateral comprehensive strategic partnership will show active roles for both China and ASEAN for reshaping and enhancing the economic cooperation in the region."

Kyaw Soe Thein said the concept of open regionalism will effectively facilitate this partnership. Building the version 3.0 of the ASEAN-China FTA and China's opening-up to ASEAN countries have benefited both sides, especially through economic cooperation under the RCEP.

Thailand's Ambassador to China Arthayudh Srisamoot said the foundation of the RCEP lies in the ASEAN-China Free Trade Agreement because the latter is the most substantive and comprehensive free-trade pact among the various ones that ASEAN has had with other countries.

Arthayudh said he hopes the China-Thailand high-speed railway can be completed soon as many people are very eager to get on the railway, which will link Thailand, Laos and China.

Han Jae-heuk, the consul-general of South Korea in Guangzhou, said the cooperation with China and ASEAN is of great importance to South Korea.

Han said South Korea-China relations have grown to enable significant achievements over the past three decades, with bilateral trade volume soaring 60 times to $360 billion last year from $6 billion in 1992.