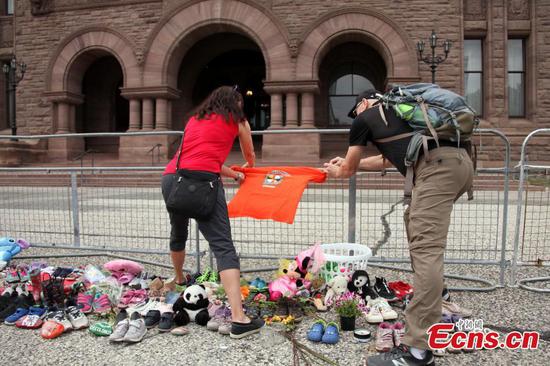 An orange shirt printed with the message “Every Child Matters” is tied to an iron fence at the front of Legislative Assembly of Ontario, Toronto, Ontario, Canada, June 2, 2021. (China News Service/Yu Ruidong)

A senior Chinese diplomat urged Canada on Tuesday to immediately stop human rights violations against its indigenous people, and called on the United Nations Human Rights Council to keep following the human rights issues in Canada.

Jiang Duan, minister of the Chinese mission to the United Nations in Geneva, made the remarks at the ongoing 47th Session of the UN Human Rights Council, saying he is deeply concerned about serious human rights violations in the North American country.

Speaking on behalf of a group of countries, Jiang noted that historically, Canada robbed the indigenous people of their land, killed them, and eradicated their culture. The world was shocked to learn the recent discovery of the remains of over 200 indigenous children at a Canadian boarding school, he said.

He quoted reports as saying that during the 19th and 20th centuries, over 150,000 indigenous children in Canada have been forcibly taken away from their parents and sent to boarding schools.

"They were subjected to malnutrition, and many fell victims to abuse and rape. At least 4,000 children died of disease, neglect, accidents or abuse while at schools," Jiang said, calling for a thorough and impartial investigation into all cases where crimes were committed against the indigenous people, especially children, so as to bring those responsible to justice, and offer full remedy to victims.

The Chinese diplomat also expressed deep concerns about discrimination and inhumane treatment against migrants in Canadian detention centers. "From 2006 to 2014 alone, tens of thousands of migrants were arbitrarily detained by Canada," he said.

"We are also deeply concerned over the illegal killings of civilians by Canadian overseas military servicemen and systemic racial discrimination, xenophobia, Islamophobia within Canada," he noted, adding that Canada has also repeatedly exploited human rights issue as a tool to promote its political agenda.

Jiang called on the Human Rights Council, the Office of the UN High Commissioner for Human Rights and relevant Special Procedures to keep following the human rights issues in Canada.