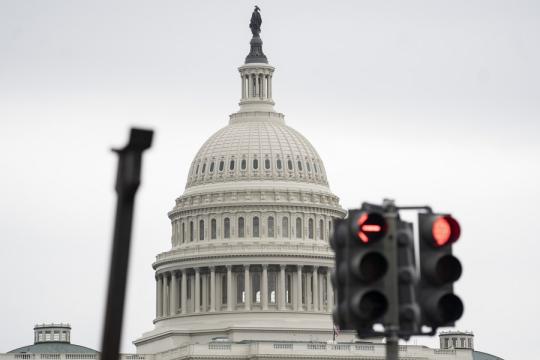 Photo taken on May 28, 2021 shows the US Capitol building behind traffic lights in Washington, D.C., the United States. (Photo/Xinhua)

The greatest danger faces the United States today does not stem from China, but of itself sliding into what former US Secretary of Labor Robert Reich called as "proto-fascism", said a recent article in The Guardian.

In an opinion published Sunday on the British daily newspaper, Reich called on his fellow Americans "not to demonize China" in a way that will create "a new paranoia" that further bends US priorities, stirs up nativism and xenophobia, and leads to heavier military spendings rather than public investments in education, infrastructure, and basic research.

According to Reich, in the postwar period, America has a track record of blaming others for its own failure in addressing domestic crisis, one notable case of which was in the 1980s, when Japan, a world economic engine, was caught up in the US blame game.

Countless congressional hearings were held on the Japanese "challenge" to America and "a tide of books demonized Japan" were published during that time, he said.

Some of them had claimed that Japan imperiled the American way of life and "ultimately our freedoms", while others had asserted that "Japan's growing power put the United States at risk of falling prey to a hostile Japanese ... world order", even though there was no vicious plot from Japan, Reich noted.

Such popular, yet distorted image of Japan has made the United States overlook its systematic problems in financial, educational and infrastructure sectors, which would ultimately be detrimental to US competitiveness, he noted.