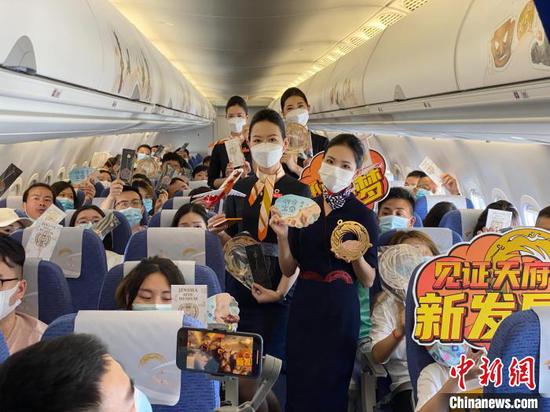 (ECNS) -- Flight EU2409 from Chengdu in southwest China’s Sichuan to Luoyang, capital of Henan Province, was turned into a temporary “sky museum” on Tuesday to introduce the cultural Golden Sun Bird relic, unearthed in the Jinsha Ruins.

The Golden Sun Bird stood out from over 1,600 pieces of cultural relics and was selected as the symbol of Chinese Cultural Heritage in 2015.

It has become a symbol of spiritual civilization in Chengdu, according to Zhang Yingyu, a guide from Jinsha Ruins Museum.

The museum has introduced how the cultural relic was excavated, its craftsmanship, cultural connotation, and how it became a local spiritual symbol.

The museum has organized many activities to introduce its collections and their history on flights and subway lines since its opening in 2019.

The museum plans to hold more cultural activities through the transportation network to showcase the charm of Chengdu.

The cultural relic is believed to be about 3,000 years old and is made from delicate gold foil. It depicts four birds and 12 sunrays radiating from its center. It has a diameter of 12.5 centimeters, weighs 20 grams, and is just 0.02 centimeter thick.