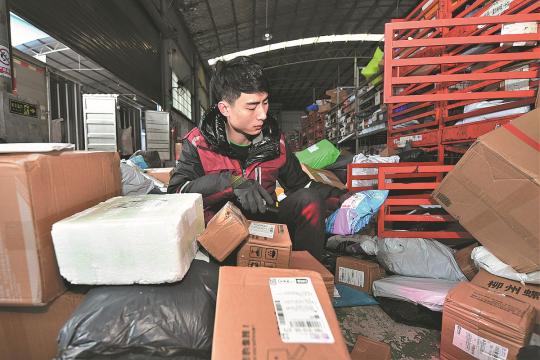 The revenue of the parcel delivery sector is expected to grow this year as it continues its decadelong boom, the sector's regulator said on Tuesday.

According to the State Post Bureau of China, the revenue of the parcel delivery sector is expected to reach 1.13 trillion yuan ($116.8 billion) this year, a year-on-year increase of 7 percent.

"China has built a large parcel delivery network extending to most areas in the country and the world, with the ability to handle more than 100 billion parcels a year," said Zhao Chongjiu, director of the bureau.

Zhao made the remarks at the sector's annual conference on Tuesday in Beijing.

"As a market full of vitality, parcel delivery has become China's calling card," he said.

China has ranked top in the world for nine years in terms of the volume of parcels it handled, according to the bureau.

"The sector has been booming in the past 10 years, with the capability to manage as many as 700 million parcels every day," Zhao said.

Parcel delivery has become an inseparable part of Chinese people's daily lives. Especially during the COVID-19 epidemic, the sector maintained the flow of goods to meet people's daily needs, he added.

Last year, millions of Chinese people were affected by the epidemic. Some were confined to their homes for weeks and relied heavily on parcel delivery services to maintain a semblance of normal life. Some were reluctant to go out shopping and chose to place orders online instead and receive the parcels through reliable networks.

Though experiencing ups and downs, the sector has shown its resilience.

Last month, residents in some areas reported parcel delays as some companies experienced staff shortages due to the epidemic.

The sector has shown its resilience by quickly clearing the backlog, such as by urging all parcel companies in Beijing to call in couriers from outside the city.

The bureau also asked companies to keep services open and reopen parcel delivery stations that were temporarily shut down due to the epidemic.

As China's Spring Festival approaches, many couriers have returned home for family reunions. To ensure medicine deliveries during the holiday, the bureau has asked parcel delivery companies to prioritize handling parcels containing COVID-19-related medical items, such as drugs, masks and antigen test kits.

There has been a great demand for the delivery of medical items, so the bureau has worked with the Ministry of Commerce to monitor deliveries of such items and has taken various measures to make sure the deliveries are prioritized, Bian Zuodong, deputy director of the bureau's department of market regulation, told a news conference last week.