Clearing up misperceptions about China-U.S. relations 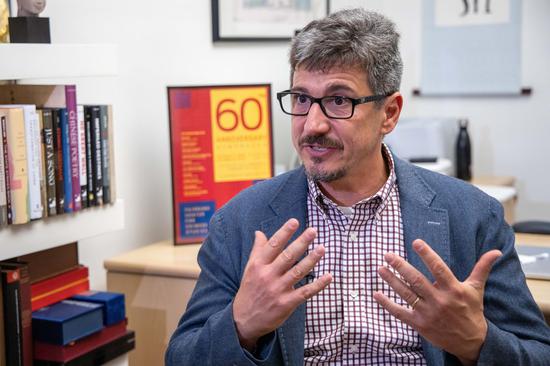 Michael Szonyi, a Canadian historian at Harvard, speaks in an interview with Xinhua at Harvard University, Massachusetts, the United States, Oct. 8, 2019. (Xinhua/Xie E)

Despite the unfortunate misperceptions about China among some U.S. politicians, the United States and China, as two major global players, must co-exist and thrive together in the long run, experts have told Xinhua recently.

Ezra Vogel, a professor emeritus at Harvard University and a China scholar since 1961, co-authored an open letter entitled "China is not an enemy" to the U.S. government and Congress in early July, in which 100 American academics, foreign policy experts, military and business leaders called on the Trump administration to re-examine its views on and approach to China.

The open letter did not get an answer from the White House but from many people who held views similar to that of the authors, Vogel told Xinhua, referring to the doubling of the number of signatories over the past three months.

"The view in Washington had been advertised as there was a consensus that we must be much tougher on China. The letter showed that there is not such a consensus," he said.

Vogel, author of "Deng Xiaoping and the Transformation of China," has visited China every year since 1980. To him, most people at the White House have very little understanding of and very little interest in understanding China.

"The speed of information, cargo and air travel around the world means that ideas of the Trump administration to disconnect are impossible," he said.

The letter said that U.S. efforts to treat China as an enemy and decouple it from the global economy will damage the interests of itself and other nations, and that the U.S. cannot significantly slow China's rise without hurting itself.

"The worst thing that we want to do is try to encourage the decoupling of China from the world economy. It does not make sense politically or economically," said Michael Szonyi, a Canadian historian at Harvard, who was among the original signatories of the letter.

Dismissing accusations that China is ripping the United States off, Szonyi asked rhetorically, "why are we still doing business with China if it's a rip-off?"

A U.S.-China Business Council report shows that 97 percent of the U.S. companies surveyed reported profits from doing business with China. Trade with China saved 850 dollars for every U.S. family on an annual average, and U.S. exports to China alone supported over 1.1 million American jobs from 2009 to 2018.

China is now the world's second largest importer of goods and services. It has the world's biggest market with the fastest-growing middle income population.

The wealthier Chinese are purchasing vast numbers of smartphones, designer clothes and new cars. Interestingly, U.S. media noticed that the consumption of pork across China has risen from 55 pigs per 1,000 people in 1961 to 501 in 2017.

Last month, Chinese buyers just completed deals to purchase a considerable amount of soybeans and pork from the United States, also seen as a sign of reconciliation in the drawn-out trade frictions.

Joseph Nye, an influential scholar in international relations and policymaking, pointed out the danger of exaggerating the fear of China or the declaration of a "new cold war."

"We have to accept that our systems are going to be different, but we can still live with each other," Nye, who pioneered the theory of soft power, said, adding that the two countries do not pose an existential threat to each other.

China has no intention of challenging or replacing the United States, said a white paper issued last month by the State Council Information Office.

Amid rising tensions over trade, technology and values, China's State Councilor and Foreign Minister Wang Yi said on a trip to New York last month that the two countries should handle differences properly, continue cooperation and shoulder responsibilities together.

After bitter, costly trade frictions over the past 15 months, the United States and China made substantial progress in their latest round of trade talks, covering multiple areas including agriculture, intellectual property rights, currency exchange rates, financial services, expansion of trade and technology transfers.

"There are many people in the U.S. who want to cooperate and we expect that there will be opportunities for the two countries to work together on major issues," Vogel said.

Experts believe their shared interests and similarities are more than their differences.

Listing two reasons for his optimism -- the economic upside of engaging with China and the necessity for the United States to shoulder its global responsibilities -- Szonyi said climate change should be the most pressing area for the two countries to join forces.

In addition to climate change, Nye said that the two have much to gain through cooperation on maintaining international financial stability, developing a stable trading system and dealing with global health issues, among others.

Both Nye and Vogel said the United States should have participated in some projects under the China-proposed Belt and Road Initiative and joined the Asian Infrastructure Investment Bank.

One solution brought forward by all three experts in terms of improving relations is to strengthen people-to-people exchanges and let non-state actors play a more constructive role.

Since the governments are having great difficulty in communicating, Vogel said it's all the more important that the people who have contacts with both countries do everything they can to maintain cooperation.

People-to-people exchanges could reduce some of those hard edges of mistrust and fear of the other side, Nye said, calling on both countries to improve their soft powers.

"If we can make ourselves attractive to each other in ways that reduce fears that lead to miscalculations, that's a win-win," he said.

For example, experts have expressed grave concerns over current U.S. policies toward Chinese students and scholars.

"U.S. policies that are making Chinese students here feel uncomfortable are a terrible mistake," said Szonyi, adding that several leading universities including Harvard have been urging the White House to reconsider its misguided policy.

Last year, the United States shortened the duration of visas for Chinese graduate students. The Trump administration also accused Chinese students of stealing U.S. intellectual property and scrutinized Chinese applications for visas to study in areas of aviation, robotics and high-tech manufacturing. China's Ministry of Education had to warn students of potential difficulties in getting a U.S. visa.

Currently, over 360,000 students from the Chinese mainland are studying in the United States, making up a third of all international students and contributing tens of billions of dollars to the U.S. economy.