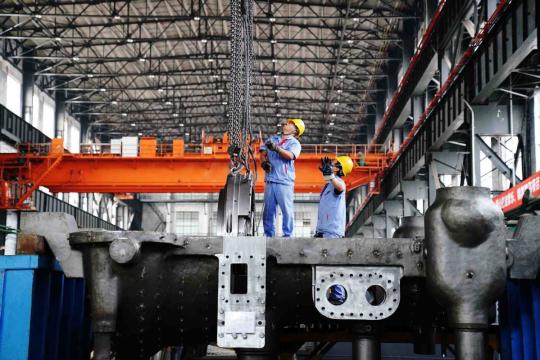 Employees work on the production line of a steam turbine manufacturer in Harbin, capital of Heilongjiang Province. (Photo/Xinhua)

The decline narrowed from the 3.3-percent year-on-year drop in the first quarter (Q1) and 1.9 percent in Q2 to 1.8 percent in Q3, said NBS senior statistician Zhu Hong.

Specifically, profits of State-owned industrial firms dropped 9.6 percent from one year earlier to 1.39 trillion yuan ($196.47 billion), while those in the private sector gained 5.4 percent year-on-year to 1.26 trillion yuan in the first nine months.

Profits in 30 of the 41 industrial sectors surveyed rose compared with one year earlier, according to the NBS.

The revenue of the major industrial firms, with annual revenue of more than 20 million yuan, amounted to 77.67 trillion yuan, up 4.5 percent year-on-year, while their business costs climbed 4.8 percent to 65.51 trillion yuan during the period.

The profit growth in the high-tech manufacturing and strategic emerging sectors has improved in the first nine months, Zhu said.

Profits of high-tech manufacturing rose 6.3 percent year-on-year in the first nine months, a growth rate 3.5 percentage points higher than that of the first eight months.

From January to September, profits in the strategic emerging sector rose 4.6 percent year-on-year, 1.6 percentage points higher than that of the January-August period.