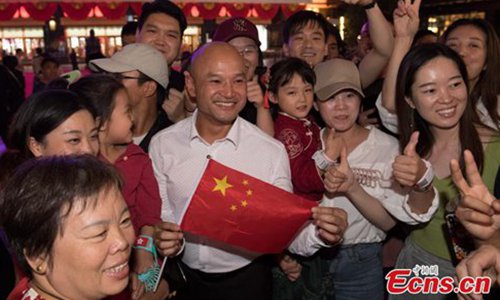 Unrest broke out again in Hong Kong for another weekend after violent protesters illegally rallied on Sunday, wearing now banned face masks, attacking the police with hard objects, paralyzing traffic and setting fires at multiple places across the city.

Also on Sunday, Hong Kong police confirmed with the Global Times that they are planning to recruit more than 1,000 retired officers to deal with the ongoing unrest in the city.

Details of the retired officer recruitment plan have been outlined in written form, with a first draft having already been made, a police source told the Global Times.

In a previous report, Hong Kong-based South China Morning Post (SCMP) quoted "a senior police source" on Sunday as saying that up to 1,000 retired officers could be rehired.

"The posting of the recruited ex-officers… will be arranged according to our operational needs. They could be put on the front lines to deal with protesters if needed, depending on their skills and experience," the source told the SCMP.

The 30,000-member Hong Kong police force has been facing great pressure, such as manpower shortages, since the outbreak of Hong Kong's political unrest in June.

Some police officers told the Global Times previously that their tasks and duty hours have multiplied and it is common for them to work more than 10 hours a day.

A police officer said his longest working time was 30 hours. In addition, more than 200 police officers were injured while on duty, which has exacerbated the manpower shortage.

To better protect police's personal safety and privacy, the Hong Kong high court granted an interim injunction order on Friday, banning doxxing and harassment against police officers and their families.

The order will be effective until November 8 when another hearing will be held to consider an extension.

According to Hong Kong's Post-Retirement Service Contract Scheme launched in 2015, "B/Ds (bureau/departments) may, having regard to their needs, engage retired/retiring civil servants on contract terms under the Scheme to undertake ad hoc, time-limited, seasonal or part-time tasks that require specific civil service expertise/experience."

Hong Kong lawmaker Junius Ho Kwan-yiu also told the Global Times in an interview earlier this month that according to the Police Force Ordinance of Hong Kong, police could consider employing "temporary police officers" as reinforcements, and there is no limit on their number.

"These temporary police have the same treatment as formal police officers and they don't have to be Hong Kong permanent residents," Ho said.