Innovating, upgrading electronics for the world 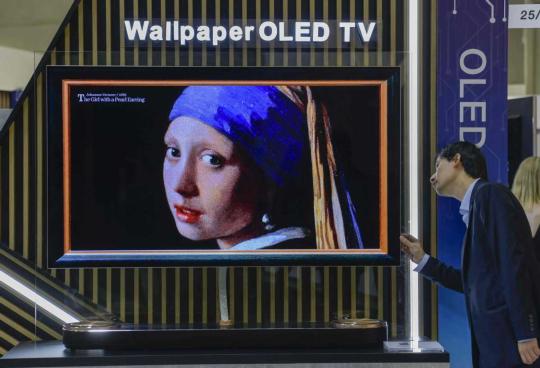 A visitor checks out a Konka OLED TV during an exhibition in Berlin, capital of Germany. (Photo/ China Daily)

Konka Group Co Ltd, a Chinese television manufacturer, is ramping up efforts to expand its presence in overseas markets, especially in Africa and the Middle East, in a bid to seek new growth points despite the slowdown in the domestic TV sector.

The company has announced it will set up a joint venture with Hoho Electrical &Furniture Co Ltd, an Egypt-based home appliances company. This will be followed by an investment in the construction of a new factory.

The JV's factory will cover an area of over 10,000 square meters in Cairo, and is expected to achieve an annual production of 600,000 TV sets within three years, providing jobs for more than 600 Egyptians.

This represents the first phase of Konka's investment in Egypt. The second phase will see a manufacturing unit that will expand the TV production to 1 million units per year. It will also increase the categories of products, covering white goods, such as refrigerators, washing machines and small appliances.

"Egypt has experienced extraordinary GDP growth in recent years, with a burgeoning population of consumers, with soaring household incomes. The formation of the joint venture with Hoho is a move to respond to the increasing demands of local consumers, fueled by the economic growth," said Chang Dong, vice-president of Konka Group and president of Shenzhen Konka Electronic Technology Co Ltd, one of the group's subsidiaries.

"Hoho has reached the production capacity of 500,000 TV sets. Through the partnership, Konka will bring high-quality resources and technologies to build up the entire supply chain," Chang said, adding the move will further spread its wings in Africa and the Middle East.

Chang said China and Egypt have great potential for extensive cooperation under the Belt and Road Initiative. Konka will accelerate its steps to penetrate and expand in Egypt and other overseas markets under the BRI framework, he said.