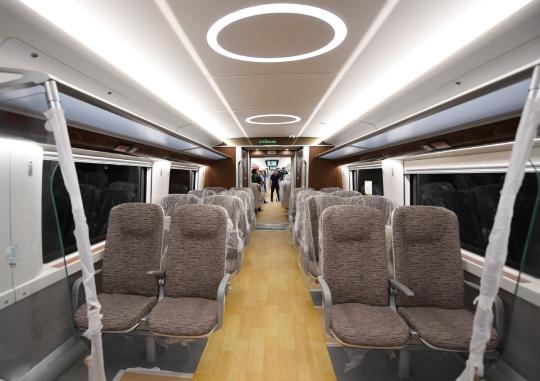 The interior of the new subway line to Daxing International Airport on June 15. (Photo/Xinhua)

Subway trains to Daxing will reach speeds of 160 km/h

It will take nearly the same amount of time to travel by train from central Beijing to the city's new international airport, due to open in September, as it does to travel to the much closer existing airport thanks to a cutting-edge subway link.

The distance from the capital's central business district to the new Beijing Daxing International Airport－around 40 kilometers－prompted concerns after plans for the 80 billion yuan ($11.6 billion) project were approved more than six years ago. That's because Beijing Capital International Airport is just 23 km northeast of the CBD.

But business executives in central Beijing, home to the Chinese headquarters of many foreign companies, have been relieved to learn that travel from their offices to the new airport－on the border of the capital's southern Daxing district and Langfang, Hebei province－will take the same amount of time as trips to the existing airport. This is because trains on the new subway line to the Daxing airport will travel at top speeds of 160 kilometers per hour, much faster than the 90 km/h limit on the Airport Express line to Beijing Capital International Airport.

Li Wenwei, a marketing manager at a Swedish company, works in the World Trade Center in central Beijing and travels frequently. It takes her 44 minutes to get to Beijing Capital International Airport by subway, with one transfer.

"I sometimes go by taxi if I have a lot of luggage, and that can take around an hour due to the traffic," she said. "I use the subway the most, and was worried that the new airport would take much longer to reach."

But when she read about the new subway line's first test run in mid-June, she calculated the time and was happy to discover she will be able to get from her office to Daxing International in just 45 minutes.

"It takes 26 minutes from Guomao subway station to Caoqiao, where the new line starts," Li said. "Then, it will take me only 19 minutes to get to the new airport.

"I never expected it could be so fast and convenient, and there is only one transfer, too."

The subway line to the airport in Daxing will offer travelers many other benefits besides speed. According to the Beijing Major Projects Construction Headquarters Office, trains traveling on the line will have eight carriages, including a business-class one, six regular carriages and one for luggage. Each will be 22.8 meters long and 3.3 meters wide.

Four elevators and two escalators will be installed at each station along the line.

"The size of the seats and aisles are both larger than the ones in the current high-speed trains, which will give passengers more space," said Jiang Chuanzhi, chief designer of the new airport line.

The line will eventually extend northward to the Lize commercial zone, closer to the city center, and passengers will be able to drop their check-in baggage off at the subway station there for transfer to their flights.

"The new line is right at the top of China's subway construction technology and design concepts," said Yang Liya, a researcher at Renmin University of China's Beijing Academy of Development and Strategy.