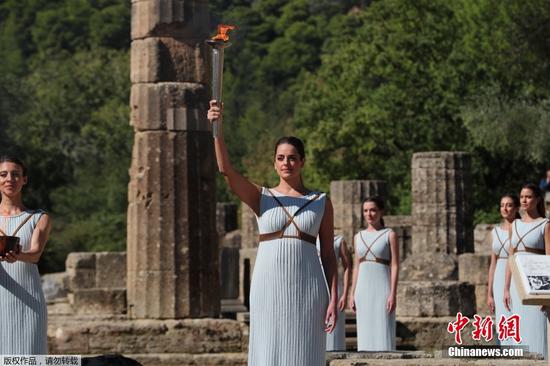 The Olympic Flame that will be burning for the Beijing 2022 Winter Games is ignited at the birthplace of the Games in Ancient Olympia, Greece, Oct. 18, 2021. (Photo/China News Service)

The Olympic Flame that will be burning for the Beijing 2022 Winter Games started its journey after being ignited at the birthplace of the Games in Ancient Olympia, Greece on Monday during a traditional lighting ceremony.

Actress Xanthi Georgiou in the role of an ancient Greek High Priestess used a concave mirror to focus the sun's rays and light the torch before the 2,500-year-old Temple of Hera, a goddess in ancient Greek mythology.

Greek President Katerina Sakellaropoulou, International Olympic Committee (IOC) President Thomas Bach, special representative and Vice-President of Beijing 2022 Yu Zaiqing were among the dignitaries at the ceremony that was held with no spectators under strict COVID-19 countermeasures.

"In our fragile world, where separation, division and mistrust are on the rise, the Olympic Games always build bridges and friendship," Bach said in his speech.

"Beijing will write history as the first city ever to host both the summer (2008) and winter editions of the Olympic Games. The Olympic Winter Games Beijing 2022 will connect the Chinese people with the world, bringing to life China's vision to engage 300 million people with sport on snow and ice, changing winter sport forever. The entire world will see this passion when China welcomes the best winter sport athletes," he added.

Escorted by dozens of female and male dancers playing the roles of priestesses, Naiades (nymphs protecting nature) and male youth (Kouroi) in pleated costumes, the flame was transported in a replica of an ancient urn to the stadium where the Olympic Games were born centuries ago, under the rhythm of an ancient Greek type Lyra and percussions.

Following a dance performance by the 38 artists inspired by ancient Greek statues on the slope of the stadium, the High Priestess kindled the first Olympic torch for the 2022 Winter Games and passed it to the first torchbearer, Greek skier Ioannis Antoniou, along with an olive branch.

In addition, a dancer released a white pigeon to spread the Olympic ideals of friendship and peace to the world as the flame's journey started.

Prior to the ritual of the lighting of the flame, the Mayor of Ancient Olympia Georgios Georgiopoulos and Spyros Capralos, President of the Hellenic Olympic Committee and IOC member, also addressed the event.

"We are certain that, as you have demonstrated in the recent past, you will organize great Olympic Games, with the charisma and prestige of your great country, with the splendor and ethos befitting the institution itself," said Georgiopoulos.

"I am sure that the Beijing Winter Olympics will be a triumph of human will and effort. They will prove that the Olympic movement runs in a disciplined manner, with discretion and accountability and they will once again write glorious pages in the Olympic history through the achievements of the best athletes in the world," said Capralos, adding "Let's walk together towards a common future" in Chinese.

Yu Zaiqing, who is also an IOC vice president, echoed by saying "Amid the outbreak of the coronavirus disease, the Olympic flame has brought us confidence, warmth and hope. It has been a source of strength in our fight to defeat the pandemic. Together, for a Shared Future."

"We wish the Olympic flame an eternal light that never goes out in the hearts of the people. We hope people across the world will join hands to dispel the gloom of the pandemic and bring about a shared brighter future," he added.

The first Chinese torch bearer to receive the flame from Ioannis Antoniou was Li Jiajun, a winner of five medals in short track speed skating at the 1998, 2002 and 2006 Olympic Winter Games.

The flame will be handed over to the Beijing 2022 organizers on Tuesday at the Panathenaic Stadium in Athens before it arrives in China on Wednesday.

Around 2,900 athletes, representing approximately 85 National Olympic Committees, are expected to compete in the 2022 Winter Games.