Forty years ago China opened up to soccer 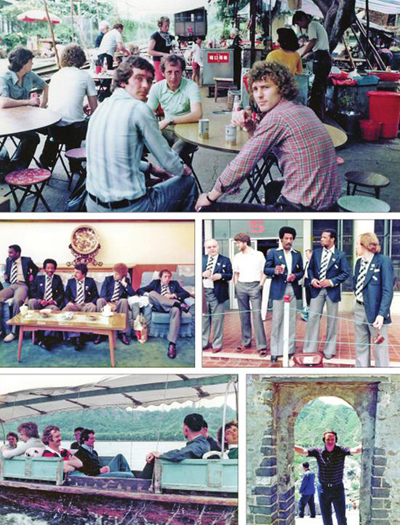 Players and team officials from English club West Bromwich Albion take part in team events and sightseeing activities during their historic tour of China 40 years ago, just as the country began its process of reform and opening-up. (Photo/China Daily)

In 1978, English soccer club West Bromwich Albion welcomed the dawn of a new era when the side toured the nation after the English national team pulled out

In an era when the Chinese Super League attracts world soccer's biggest names to play in front of packed stadia, it is strange to think there was a time when overseas footballing visitors were a novelty.

But that is how things were four decades ago, and, rather than Real Madrid, Juventus, or Manchester United, the first Western team to make the journey, in 1978, was English side West Bromwich Albion, which is known as West Brom.

It was a visit that would change not just perceptions of China, but entire lives, long beyond that summer.

In the 1970s, as China began re-engaging with the outside world following the "cultural revolution" (1966-76) and as it embarked on its process of reform and opening-up, Britain was quick to establish strong ties. In the spirit of cultural exchange, it was proposed that the England soccer team should visit China for a short tour in preparation for the 1978 World Cup in Argentina.

When England failed to qualify for the tournament, though, their visit became unnecessary, so West Bromwich Albion chairman Bert Millichip, a prominent member of England's Football Association, proposed his team went instead－and so began one of the most unlikely episodes in English soccer history.

John Wile, West Brom's captain on the trip, said it was a step into the unknown.

"Normally, an end-of-season trip would be somewhere in Europe or North America, so it was very evident that this would be very different－China wasn't a place people went to on holiday in those days," he said. "We had lots of meetings with people from the FA, the Foreign Office, and the Chinese embassy, so it was obviously something very prestigious. We were given lots of information on what to expect and how to behave if certain situations arose－I don't think that would have happened if we'd been going to Spain!"