Forty years ago China opened up to soccer(2) 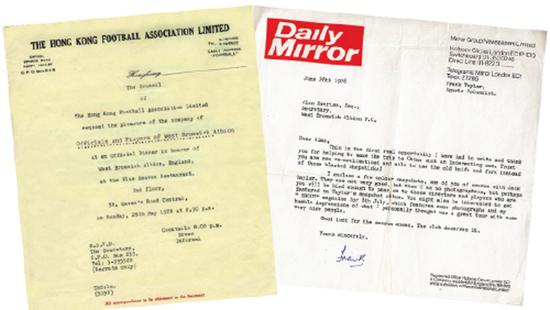 Two letters from 1978 discuss aspects of West Brom's tour of China (above). Players from China and the UK leave the pitch together after one of the games on the eventful tour that saw the tourists play five games in 11 days. (Photo/China Daily)

The trip came at a fascinating juncture in Chinese history, and fortunately for social historians as well as football fans, it was captured on film by the BBC.

Reporter Julian Pettifer, who had worked extensively across Asia, including in Hong Kong and the Chinese mainland, followed the team on the tour. His film reveals a clash of cultures in a society that was about to be transformed.

"I think the BBC wanted to send a current affairs reporter because they thought it might be a chance to cover other things about China as well, and what attracted me was the prospect of observing the culture-shock of the players, who were used to having an easy life and being in the spotlight, going to a society which was so different," he said. "As it turned out, the trip was extremely organized, so I didn't have a chance to go off and look at anything else. So, the film is purely about the team's visit. It was fascinating, though, as it was a British version of ping-pong diplomacy."

Ping-pong diplomacy refers to the visit of the United States table tennis team to China, which preceded the visit of U.S. President Richard Nixon in 1972.

The West Brom trip, billed in the official brochure as having been organized by the Football Association and the London Export Corporation, saw the team play five games in 11 days- winning them all－under the banner of "Friendship first, Competition second".

"It was impressed upon us that this was the theme of the tour, and we were very well prepared for what to expect on and off the pitch," said Wile."We were told that we wouldn't be facing any hard challenges because, in China, if someone got injured, the player would stop and go back to give comfort to the person he had kicked!"

Manager Ron Atkinson had only joined West Brom a few months earlier, and said the trip was unlike any end-of-season tour he was used to.

"Usually, if you go away, if the team have done well, it's to somewhere like Spain, as a bit of a treat, but this was very different," he said."We really didn't know what to expect on the pitch, so we played full-strength teams, the best players we had available. It was an extremely long journey at the end of a hard season, so my main task was to keep them on their toes and remind them what they were there for. In some ways, the games were a release for the players, because that's when they really knew why they were there."

Dave Harrison covered West Brom for local newspaper the Birmingham Mail. He remembers the trip as a fascinating experience.

"Some players were more enthusiastic about going than others, but, from my point of view, it was a cracking story. In those days, how many people would get access to places like that?" he said."It was a wonderful experience, but we had to remember that we were there in the name of work and treat it as a proper sports story. The quality of the football from the local teams wasn't great, but Ron (Atkinson) took it very seriously and wanted to win every match. We played a game in the National Stadium with Jack Taylor as the referee. He'd been the referee for the 1974 World Cup final, and a film had been made of that which had been shown in China, so he was the only one the locals recognized. They treated him like he was a film star! When he made a couple of decisions against the home side, there was a murmur from the crowd followed by an announcement, and they went silent again. It turned out they were being told to keep quiet. We'd never experienced an atmosphere like that before."