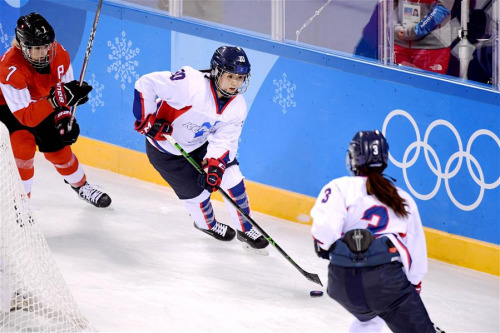 Choi Jiyeon (C) of the unified team of the Democratic People's Republic of Korea (DPRK) and South Korea drives the puck during their preliminary match of women's ice hockey against Switerland at the Pyeongchang 2018 Winter Olympic Games at the Kwandong Hockey Centre in Gangneung, South Korea, on Feb. 10, 2018. (Xinhua/Wang Song)

A unified Korean women's ice hockey team, first of its kind in the Olympic history, has won the hearts of millions on Saturday night, despite a 8-0 loss to the Sochi bronze winner Switzerland in their debut at the PyeongChang Olympic Games.[Special coverage]

The 19-year-old Swiss forward Alina Muller are the star of the game with four goals, while Phoebe Staenz and Lara Stalder gave two goals each for Switzerland in the second and last period respectively.

The resilient Koreans refused to cave in till the last minute of the game, but their poor defense and inexperience cost them too much. Jong Su-Hyon from the Democratic People's Republic of Korea (DPRK) and South Korean forward Han Soo-jin contributed the team's two most aggressive attempts in the whole game, however their efforts were in vain as Jong's shot was blocked by Swiss goalie Florence Schelling, while Han's hit the net roof.

Even though, the unified Korean team received long-lasting cheers and applause from more than 3,600 spectators, including a DPRK female cheer squad, mostly in red uniforms. The young ladies, waving a small-sized unified Korea flag and chanting constantly "win, win, win" , or "We are one" , were also under spotlight.

Among the spectators were also Thomas Bach, president of the International Olympic Committee, South Korean President Moon Jae-in and Kim Yong Nam, president of the Presidium of the Supreme People's Assembly of the DPRK, who led a high-level delegation to South Korea for the Games.

They met the unified Korea team and took group pictures with the players on the rink after the game.

"Good job," Bach and President Moon said to the players, shaking hands one by one with all of them.

"It feels like I'm competing in my own country," said Jung Su-Hyon at a post-game press conference.

Despite the loss, South Korea forward Park Jong-ah remained hopeful for the games to come.

"It's our first match. We still have the hope to get into the knock-out stage," said Park.

"We're one team and we had gone all out at the rink tonight, but we have actually practice as a team together for less than a month."

In an earlier game in the evening, Sweden defeated Japan 2-1 to claim their first victory in PyeongChang.

With the victory, Switzerland topped the lower-ranked Group B, which also consists of Japan, Sweden.

Canada, Finland, the Olympics Athletes from Russia, and the United States make up the higher-ranked Group A.