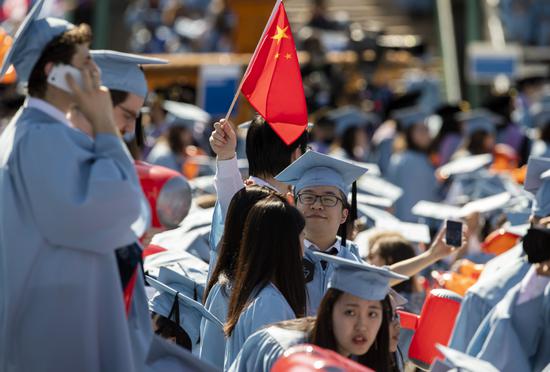 Chinese students attend the graduation ceremony at the Columbia University in New York in May, 2019. (Photo: Xinhua/Wang Ying)

The United States should stop using excuses to restrict Chinese students going to the country, which interferes with normal people-to-people exchanges, students and experts said.

In the latest incident of restrictions, the University at Buffalo terminated the F-1 status of at least 30 Chinese students for not submitting their I-94 forms to International Student Services within 30 days of arrival on campus, according to The PIE News.

The report cited the Chinese Students and Scholars Association at Buffalo as saying the form "is not a very difficult document to obtain", but not all schools require it.

The I-94 form is the arrival-departure form for international students.

According to the Chinese consulate general in Los Angeles, when entering the U.S., a number of Chinese students have been repeatedly cross-examined at the airport about their intentions in coming to the US to study, their academic grades, whether they have been employed, received disciplinary punishment and "stolen" research data in laboratories and then been repatriated.

Their personal freedom was restricted for dozens of hours and some other Chinese students were questioned and had their digital devices confiscated when leaving the country, the consulate general said on Oct 8.

Recently, more than 500 Chinese students who had received offers to pursue postgraduate studies as STEM majors at US universities were denied visas by the US government due to Presidential Proclamation 10043, issued last year by then US president Donald Trump.

While the Biden administration resumed issuing visas to Chinese students in May, it has not scrapped the proclamation.

Experts said the restrictions go far beyond the impact on individual students and could have a spillover effect to deter Chinese students in majors other than science, technology, engineering and math from studying in the U.S..

Wu Xinbo, dean of the Institute of International Studies at Fudan University, said while the Biden administration has opened the gate for Chinese students to study in the US, it has left the small hurdles put up by the previous administration unchanged.

He said the ban is too arbitrary and sweeping, and the universities are just like other universities in China, each having thousands of students.

However, the tense bilateral relationship between the two countries means the Biden administration might not reverse the policy, fearing criticism of being soft on China, Wu said.

The restrictions have hit students' willingness to study in the U.S. and some have opted to study in other countries, Wu said, adding that prospective overseas students should look for universities in several overseas destinations.

One student was supposed to attend a doctoral program at the University of Pittsburgh in September, but his visa application was turned down in June by the U.S. embassy in Beijing because he attended Harbin Institute of Technology for undergraduate and postgraduate studies.

He was offered a full scholarship by Pittsburgh, yet due to Presidential Proclamation 10043, his studies were stalled.

Although he was aware of the restrictions imposed on Chinese students by the U.S., he still decided to only apply for U.S. universities due to their academic competitiveness and the belief that Biden would be friendlier to Chinese students.

"I could not sleep well for several months and all the preparations made last year to study in the US were wasted," he said.

The policy is too arbitrary and targets almost all students from specific universities, he said. "As a civil engineering major, there is no civil and military fusion in my studies."

Another student, a doctoral candidate at Texas Tech University, had his visa application rejected by the US consulate in Shanghai in June also due to Proclamation 10043, as he had attended Nanjing University of Aeronautics and Astronautics for undergraduate studies.

"I graduated from the university seven years ago, and my major is civil engineering, yet the ban still affects me," he said.

Due to the COVID-19 pandemic, the 29-year-old has spent last year at home attending online courses, so he has not been to the U.S. despite being in the second year of a doctoral program.

He has found a job at an enterprise in his hometown in Wuhu, Anhui province, while preparing to apply to study in countries other than the U.S..

"I was blacklisted by the U.S. and I will never visit the country, even for traveling," he said.