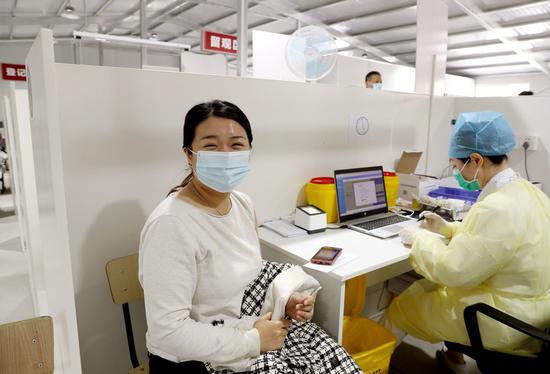 More than 60,000 Taiwan compatriots have been vaccinated against COVID-19 on the Chinese mainland and Taiwan residents are welcome to travel across the Straits to get jabs, the Taiwan Affairs Office of the State Council said at a news conference in Beijing on Wednesday.

Taiwan is battling an outbreak but faces a severe vaccine shortage. Taiwan Affairs Office spokesman Ma Xiaoguang told the news conference that the mainland cares about the health of Taiwan compatriots and will offer support for those who come to the mainland to be vaccinated.

Among those who have come to the mainland for vaccination recently are singer Hsiao Chingteng and Yok Mu-ming, former president of the pro-unification New Party of Taiwan, who received vaccine doses in Shanghai.

Julian Chen, a singer and actor from the island, posted a video of himself getting the first dose on the mainland on his social media account on June 10.

"Thanks for the love from the motherland," he wrote.

Ma said,"The feelings expressed by them after being vaccinated on the mainland reflected the close ties between the two sides of the Taiwan Straits."

Since the outbreak on the island began last month, Taiwan has recorded more than 100 newly confirmed cases a day for about a month. The island has been struggling with a shortage of vaccines, with just 1 percent of its 23 million people vaccinated.

As soon as the outbreak began in Taiwan, the mainland expressed its willingness to make prompt arrangements to provide the island with vaccines and to support NGOs in donating them to Taiwan compatriots, Ma said.

However, "Democratic Progressive Party authorities refused the offers and even openly slandered the mainland with various excuses," he said, adding that the mainland is willing to do its utmost to help Taiwan residents who want to get vaccinated.

Taiwan residents who fly to the mainland can get vaccinated as long as they meet vaccination requirements and strictly adhere to entry regulations related to epidemic prevention before boarding and after arriving, Ma said.

According to preliminary statistics, the number of Taiwan compatriots vaccinated on the mainland reached 62,000 by the end of last month, he said.

Chang Chen-bin, a doctor from Taiwan who works at Guoyu Hospital in Quanzhou, Fujian province, has received two doses of Sinopharm vaccine on the mainland.

"There was no discomfort or adverse reactions during and after the inoculation," he said. "The epidemic has rebounded in many countries. I am very worried about the safety of the people in Taiwan.

"The safety and effectiveness of mainland vaccines are internationally recognized. The mainland is both willing and capable of helping Taiwan fight the epidemic."

Peng Hsiang-wu, 46, from New Taipei City in Taiwan, is the general manager of Zhongxiang Textile in Nanjing county, Zhangzhou, Fujian. He said he and many of his Taiwan friends on the mainland have finished their inoculations.

"It was convenient," he said, "I feel at ease that the mainland has done a good job in preventing the epidemic and my factory has resumed about 80 percent of its production.

"My parents are still in Taiwan and they don't know when the vaccine on the island can be arranged for them. My 65-year-old father is considering traveling to the mainland to get vaccinated."

Lin Tzu-ming, 45, from Taichung, Taiwan, is the general manager of Donggang Precision Machinery in Zhangzhou. He said he traveled from the island to the mainland on May 18 and received his first vaccine dose on the mainland.