Why are the 164 new COVID-19 cases in Xinjiang's Kashgar asymptomatic? 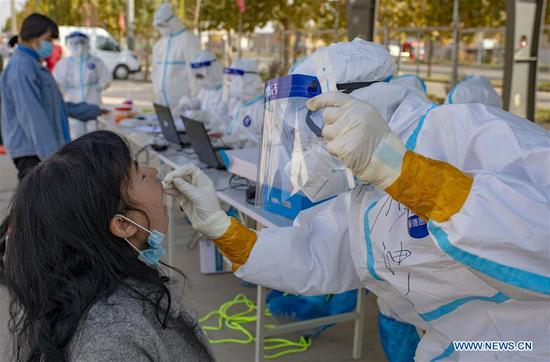 A medical worker stands by as people line up to have their samples collected for nucleic acid testing in Shufu County of Kashgar Prefecture, northwest China's Xinjiang Uygur Autonomous Region, Oct. 26, 2020. (Xinhua/Hu Huhu)

Twenty-six new coronavirus cases were detected between Sunday and Monday in the remote city of Kashgar in China's far west, bringing the total of asymptomatic patients in the region to 164.

Wang Guangfa, director of the Department of Respiratory and Critical Care Medicine at Peking University First Hospital, said COVID-19 can be detected two days before the symptoms start showing. He said, given the local government's quick response, it's highly likely that medics detected the virus before the patients developed symptoms.

Chen Xi, an associate professor at the Yale School of Public Health, concurs. Chen said COVID-19 has an incubation period, so if the new cases are detected very soon in Kashgar, they may have no time to show symptoms. But that doesn't mean they will not develop symptoms in the future.

A second reason the patients present as asymptomatic could be their age, Chen said. He said the group infection occurred in a factory where most of the workers are young people, so the chance of developing no symptoms is much higher, which is quite common in clinical findings around the world.

According to Wang, an asymptomatic patient has no symptoms from the beginning to the end after contracting the novel coronavirus. Based on his experience, the number of this kind of COVID-19 patient is small, and most of them will have obvious symptoms, such as fever or respiratory infections, in a few days.

He predicted that many of the asymptomatic COVID-19 patients would develop symptoms during their quarantine time.

However, some suspect that the increase in asymptomatic patients may be due to a novel coronavirus mutation.

Chen said that the virus strains found in Asia differ somewhat from those found in America. He said from the perspective of virology, viruses are likely to mutate and reduce their lethality to improve their chances of survival in the human body and spread more widely without being detected. However, Wang disagrees with Chen on this point. According to Wang, the possibility of virus mutation is quite small.

On Sunday, Xinjiang's local disease control department tested a total of 831 workers in the textile factory where the first COVID-19 case emerged, and all have tested negative.

The local government has also detected 16 close contacts of the 17-year-old female that first tested positive for COVID-19 and 406 others who are close to the 16. Her parents and brother tested negative, even though all 137 new cases were linked to the factory where her parents worked.

Wang Guiqiang, director of the infectious diseases department at Peking University First Hospital, told reporters that it's highly possible that the parents brought back the virus from the factory and then passed it on to their daughter. However, it still can't be ruled out right now that it's not the young woman who might have passed the virus on to her parents.

The 26 newly found virus carriers have all come into close contact with asymptomatic people detected earlier, according to officials.

Chen said considering the current situation, antibody testing should be adopted in some communities, as it's still unclear when the infection started and how many people have been infected.

"Based on our experience, we need to be really careful when there is no clear source of the coronavirus outbreak," Wang said, adding that one infected person can pass the virus on to an average of three people, which means there might be more COVID-19 cases yet to be detected, perhaps even a "super spreader," so it's vital to find out whether people or items such as cold-storage food triggered this wave of the novel coronavirus.

Meanwhile, the local government has imposed travel restrictions, and some flights have been canceled. Schools have been told to close to avoid cross-infection. People have also been asked to stay in their neighborhoods to allow medical staff to carry out nucleic tests. If they have to leave the city, they're required to provide a negative nucleic acid test result.