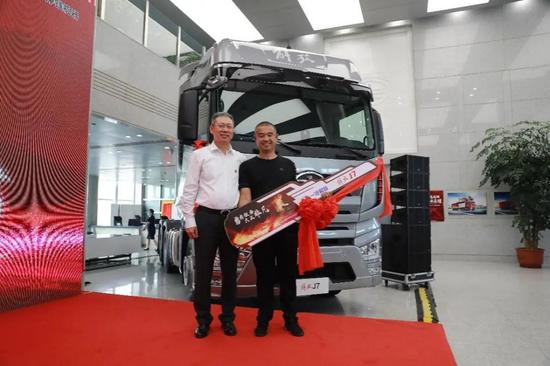 Sun Gang(R), a driver who has risked his life driving a burning truck away from a populated area to prevent casualties, receives a new truck for his lost vehicle, July 31, 2020. (Xinhua/Zhang Jian)

China's leading automaker First Automotive Works (FAW) Group Co., Ltd. has gifted a truck of its flagship Jiefang brand to a driver who risked his life driving a burning truck away from a populated area to prevent casualties.

Zhu Qixin, general manager of FAW Jiefang Truck Co., Ltd., said the new truck was given to Sun Gang Friday to compensate him for his lost vehicle, which was of the same brand. The reward was also given to "promote goodness in society so that more people will stand up and make the right choice in times of crisis."

On July 14, Sun sent his truck in for repairs in the city of Xinmin, which is about 60 km from Shenyang, the capital of northeastern province of Liaoning. When repairmen were welding, the flames accidentally ignited the straw curtains previously used as bedding when transporting watermelons in the truck.

Sun said he had just refilled the truck's fuel tank, and the fire risked triggering an explosion at any time. The surrounding area was densely populated and there was a gas station nearby.

"At that time, the situation was urgent. I had no time to think. I jumped in the truck and took off, with flames all around me. I couldn't let anyone else get involved," Sun said.

Onlookers recorded the scene of the burning truck taking off and uploaded the clips online, which quickly went viral.

Sun drove the truck to open ground and watched it burn.

The truck had cost Sun his life savings. It was purchased with a loan of more than 500,000 yuan (about 71,700 U.S. dollars) in 2018. Not long ago, the loan was paid off. Sun used the vehicle for long-distance cargo transport.

"After the incident, everyone in my family was just happy that no one was hurt. But of course, the truck was destroyed, and we were all upset that we'd have to start all over again," he said.

Yet good things happen to good people. On July 25, Sun received a phone call from FAW Jiefang, informing him of the reward.

"I couldn't believe it. I thought it might be a prank call," Sun said.

The new truck will be the third Jiefang truck Sun has owned. The veteran truck driver had traveled across the country transporting cargo to earn money to support his family.

"I have decided to take my earnings from the first shipment using my new truck and donate it all to charity," Sun said.