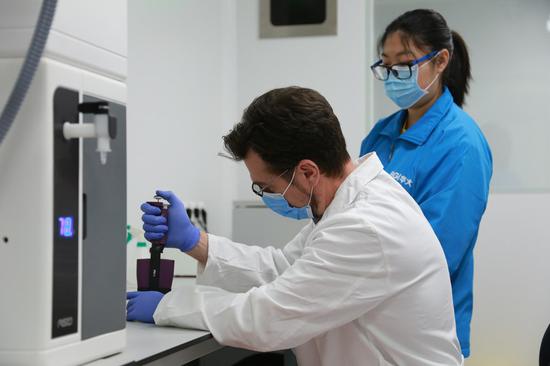 A new Fire Eye laboratory for detection of COVID-19 opened in Serbia's southeastern city of Nis on Thursday, becoming the second of its kind in the country after the first in Belgrade.

According to a press release from the Serbian government, the new testing lab has a capacity of 1,000 samples per day.

According to the press release, Brnabic said in her speech that the new laboratory will expand the scope of testing further, which will help the country to cope with the ongoing peak of the COVID-19 epidemic, and get better prepared for the expectedly more difficult situation in the autumn.

The laboratory was built from zero in just three months, Brnabic reminded, expressing gratitude to Chinese partners and for the donation of equipment.

Brnabic reminded that Serbia's testing capacities increased 20 times since the beginning of the outbreak in March, and that the country so far has processed around 650,000 samples.

Ambassador Chen said that the speed and efficiency in the construction of the new laboratory are exemplary in the joint fight against COVID-19 between Serbia and China through cooperation in the field of health and new technologies.

"Chinese companies in Serbia are actively participating in the fight against the virus, and they are fighting together with Serbian friends for economic recovery," she said.

The government of Serbia financed the new laboratory with around 3.5 million euros, while the Chinese Zijin Copper donated 500,000 euros, the release revealed.

The two Fire Eye labs, one in Belgrade with a capacity of 2,000 samples per day and one in Nis, were built by the Chinese BGI Group, whose experts arrived in Serbia in late March.

Serbia's Ministry of Health announced on Thursday that 321 cases of COVID-19 were confirmed in the past 24 hours, while seven people died. Currently, 4,353 people are hospitalized across the country, 150 of them on ventilators.